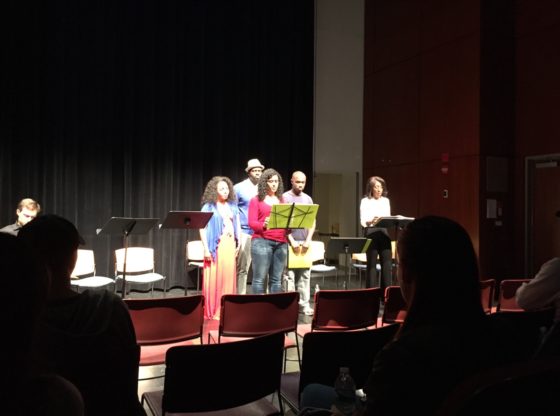 Communication Arts Professor Magaly Colimon-Christoper wrote and directed the play The Hunting Season, which was performed on October 5th and 6th in SFC’s Maroney Theater. The play followed the story of a Haitian-American family struggling with the reality of their sons and brothers being a black men in society today, and these men being victims of those who bring a bad name to the law enforcement of our country.

The story begins with characters Marie Allerte Delacroix and her twin brother Boukman—ironically born on Independence Day—who live with mother Marie Jose Delacroix who is tortured by the stress and fear of having her son killed after her husband and the twins’ father, Emanuel Delacroix, is killed by the police during a violent arrest. She states that the black men in her family are beautiful elephants and it is hunting season.

The story continues with the twins losing their mother after she slits her wrists from the grief that consumes her over her husband’s death; the twins are then left to raise themselves. Marie begins to have visions of the parents and hides her brother for as long as she can before he tells her that he will not hide anymore, he is a black man in america and nothing will change that fact. The play finishes with Boukman becoming a civil rights leader and suffering a similar death of his father.

The panel went on to give advice on how one can make a difference by taking little steps like joining your community board to support the fight against racism. Kenneth W. Miles told of his experience going to a school with a small population and took part in their black student union, which inspired him to join Manhattan’s Community Board 9 representing West Harlem.

Hill also spoke on social media activism and quoted how he felt that “racism was growing in the dark” on the internet where anyone could make anonymous statements without fear of judgement.

The play asks its viewers to consider changing the world with the arts.