THE GLOBAL OBAMA: CROSSWORDS OF LEADERSHIP IN THE 21ST CENTURY 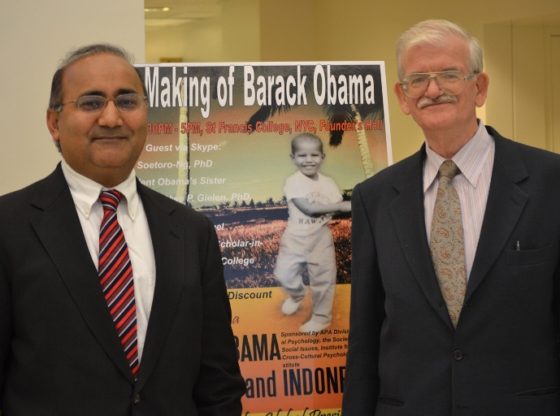 President Barack Obama has had a tumultuous five years in office, with some international relationships flourished and others gone sour. Hair that was once very black is now a distinguished grey, with the world watching his every move.

SFC Senior Fellow of the Institute for International & Cross-Cultural Psychology Dr. Dinesh Sharma, along with Dr. Uwe P. Gielen, founder and Executive Director of the Institute, examine President Obama’s leadership in their new collection of essays, The Global Obama: Crossroads of Leadership in the 21st Century published by Routledge.

The Global Obama contains two dozen essays from an eclectic body of authors and delves into the president’s image in five continents and more than twenty countries.

This is the first book of its kind to examine the Obama administration and how they’re viewed by publics, governments and political commentators around the world.

Sharma and Gielen have presented The Global Obama around the world and close to home, speaking at conferences in South Africa and Hawaii as well as at Columbia University, Marymount Manhattan College, and York College. The authors discuss Obama’s efforts to shape the relationship between the United States and China as well as how his early socialization in the Asia-Pacific region helped prepare him to tackle global problems.

The Global Obama can be ordered online through Psychology Press at http://www.psypress.com/books/details/9781848726260/.