THE FRANCISCAN ON THE RUN

Home /News/THE FRANCISCAN ON THE RUN 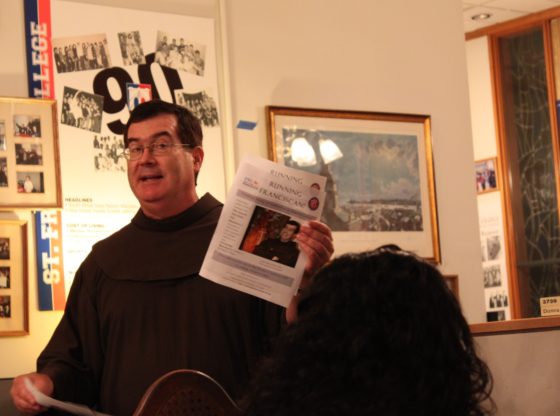 The alumni office hosted an Interfaith Prayer Service luncheon on Thursday, Oct. 4, to honor The Feast of Saint Francis of Assisi.

In all of his years, serving the church it is the first time he has ever served in Brooklyn. Father Brian opened the service with, “Here at St. Francis College, we rebuild lives through the gift of education—In a world filled with hostility St. Francis College builds hospitality.”

In high school, he played football and ran track but in college he began running long distance. After completing his first marathon, Father Brian said, “I felt bones and nerves in my body I never even knew existed.”

The feeling of accomplishment was enough to leave Father Brian ready to run again and again.
In the fall of 1999, Father Brian ran three marathons in 28 days, which was the most difficult challenge of his running career.

With a torn meniscus and shin splints he hopes to cross the finish line in six to seven hours and he laughed, “Most of all I hope to finish in one piece.”

“I use to be a race horse and now I am just a work horse,” said Father Brian.

He added, “One in seven people in the world are from Brooklyn, there is nowhere like it.”

Father Brian has earned the name “The Franciscan on the Run.” However, according to him, students and faculty of St. Francis College are always running.

“The whole college of St. Francis is running Franciscan in all different ways –whether its through your work, your heart or your spirit—everyone is always running.”

You can make a donation today at: http://runningfranciscan.kintera.org/faf/home/default.asp?ievent=1041651