THE CHINA STUDY: WELL-HIDDEN RESEARCH DEMONSTRATING THE RELATIONSHIP BETWEEN DISEASE AND THE FOODS WE EAT

Home /News/THE CHINA STUDY: WELL-HIDDEN RESEARCH DEMONSTRATING THE RELATIONSHIP BETWEEN DISEASE AND THE FOODS WE EAT 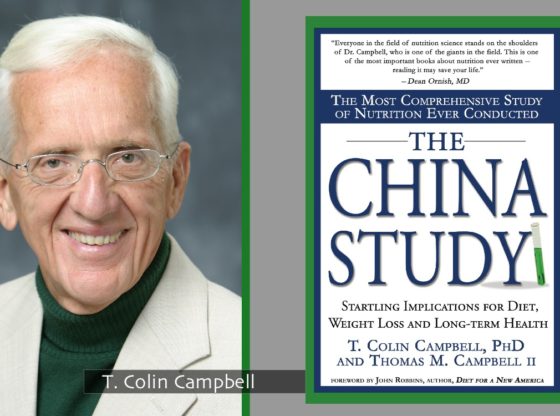 During the 1960s there was an outbreak of liver cancer among children in the Philippines and the United States through the United Nations was involved in determining the cause.

A researcher named T. Colin Campbell, now 82 years old, and Professor Emeritus of Nutritional Biochemistry at Cornell University and Founder and Chairman of the Board of Directors of the T. Colin Campbell Center for Nutrition Studies, worked with a team of other scientists to solve this problem.

It was determined that a fungus growing on peanuts and corn produced a carcinogen called aflatoxin (AF). The source of the disease was uncovered but a greater mystery was yet to be solved. The children exposed to AF fell into two groups, those who were from affluent families and well-fed on high quality protein and those of poor economic standing who ate very little meat.

Incredibly, it was the children from affluent families who contracted liver cancer, where the children from poor families although exposed to the same carcinogen, did not. Further research lasting almost forty years revealed an incredible secret.

Campbell became aware of a scientific study from India in the 1940s where scientists fed rats different levels of animal protein in their diets after exposing them to carcinogens. The study, which received little attention at the time, demonstrated that rats fed a high protein diet contracted liver cancer and those fed a low animal protein diet did not.

Campbell, through funding from the Nation Institutes of Health, began a decades-long research project to figure this out. The results of his research have been published in peer-reviewed journals but largely ignored. He and his researchers found that rats consuming 20 percent animal protein after being exposed to AF contracted liver cancer or liver tumors called foci, at a rate of 100 percent. Rats fed a 5 percent animal protein diet did not develop any cancer or foci.

That is 100 percent vs. 0 percent an incredible statistical bonanza! It became clear to Campbell and his research team that there was a significant correlation between disease and animal protein.

Campbell and his team tested animal protein fed to mice infected with hepatitis B virus. Once again, the higher the protein in the diet the more the mice developed cancer. His research received continuous funding from the NIH and other sources, but because animal protein was involved, his research received heavy opposition from the dairy, meat, and poultry industries who’s scientists attempted to marginalize his work.

The China Study is a book written by Campbell, complete with citations describing years of his research. When people apply his principles to making adjustments in their diets from animal-based foods to plant-based foods some incredible things happen. Existing cancers are often suppressed, heart disease is reversed, type 1 (insulin-dependent) diabetics require less insulin to maintain proper sugar levels and type 2 diabetics are able to avoid insulin all together and maintain proper sugar levels. Persons with inflammatory and auto-immune diseases such as rheumatoid arthritis and multiple sclerosis experience significant reduction of their symptoms. And the list goes on.

The implications are profound because it seems that whenever scientists require animal protein for experimental purposes they have found that the most can be achieved by using the protein casein, the principle protein found in cow’s milk.

Milk, cheese, cream, eggs, beef, pork, chicken, veal, lamb, and all other sources of animal protein have been indicd in the promotion of cancer and other diseases, the source of great controversy.

Persons interested in relief from diseases for which cures remain elusive to science and medicine would do well to consider reading this book.