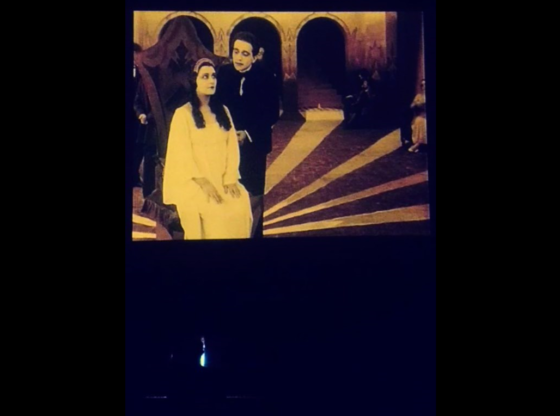 On Tuesday February 6th 2018, the 1920 Silent German Film “The Cabinet of Dr. Caligari” was screened in the St. Francis College Founders Hall. The event was hosted by Communications Professors Scott Weiss and David Gewirtz. After a brief Turner Classic Movie-esque introduction by Weiss, the 74-minute film began promptly around 11:10 am and ended by 12:25 pm. The film screening included a brilliant live piano accompaniment by the wonderful Ben Model (featured at the piano in the lower left corner of the picture above and in the portrait below this article).

“The Cabinet of Dr. Caligari” was originally released on February 26th, 1920 in The Weimar Republic (now Germany). The film was directed by Robert Wiene and written by Hans Janowitz and Carl Mayer, both of whom were pacifists. The movie’s script was inspired by Janowitz and Mayer’s distrust in authority following their experiences in the German military following World War I. The movie centers around Dr. Caligari, an insane hypnotist (played by Werner Krauss) who uses a sleepwalker named Cesare (played by Conrad Veidt) to commit murders. The film’s characters include symbolic undertones; Dr. Caligari represents the wartime German government and Cesare symbolizes the common man (or World War I soldiers) conditioned to kill.

The movie’s most prominent actor is arguably Conrad Veidt, who found success in both Germany and America from the 1920s until his death from a heart attack in 1943 at age 50. Veidt starred in 1928’s The Man Who Laughs (his Gwynplaine character in the film was an inspiration for the DC Comics character The Joker) and 1942’s classic American drama “Casablanca.” Along with Veidt and Krauss, “The Cabinet of Dr. Caligari” also starred fellow German actress Lil Dagover and Austrian actor Friedrich Feher (pictured above in the film screening from left to right).

“The Cabinet of Dr. Caligari” is widely considered a monumental Silent Film due to its influence on the history of filmmaking. Because of the movie’s dark visual style, “The Cabinet of Dr. Caligari” is considered a pioneering movie in the German Expressionist film movement that would include classics such as 1931’s “M,” 1927’s “Metropolis,” and the first unauthorized screen adaptation of Bram Stoker’s Dracula, 1922’s “Nosferatu: A Symphony of Horror.” The movie is deemed a precursor to the cult films and arthouse movies that were made worldwide during the latter half of the 20th century. Due to its flashbacks, twist endings, and unreliable narrators, the movie is also widely considered a major influence on American horror movies and film noirs.