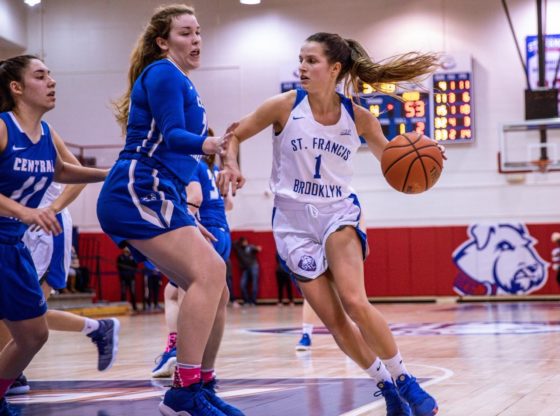 The season has finally been wrapped up for the St. Francis women’s basketball team as they took a victory in their final regular season game over Central Connecticut State University with a final score of 83-69.

The game opened up with Amy O’Neill scoring a basket immediately following after her team getting the tip-off. The Terriers then went on a scoring outburst over the Blue Devils as they lead by as much as 20 points in the second quarter. This huge deficit was quickly changed to a six point deficit just midway through the third.

Entering the fourth quarter, the Terriers had a 15 point advantage over CCSU and continued to step on the gas which gave them a 20 point lead again with 6:17 remaining in the game.

Sophomore Ally Lassen lead the team with 22 points (career high), 7 rebounds and 3 assists while shooting 61% from the field. Ally was followed by Freshman Ebony Horton as she scored 19 points while grabbing 4 rebounds. And once again Senior Amy O’Neill earned a double-double tonight (13 points and 11 assists). Junior Jade Johnson did not play tonight.

Central Connecticut State was led by Sophomore Ashley Berube as she scored 26 points (career high) and 8 rebounds in tonight’s matchup. Senior Kiana Patterson ended her career at CCSU with 18 points, 3 rebounds, and 3 assists.

With this victory over CCSU, the Terriers have locked in the #3 seed in the NEC final standings along with a 12-6 final record in conference play. Gaining this victory officially puts CCSU out of the NEC playoff contention.

St. Francis College will play their first game of the NEC playoffs against Mount St. Mary’s at Pope Physical Education Center this Monday with the time TBD. That will be the first time in SFC women’s basketball history in which they will host a playoff game.