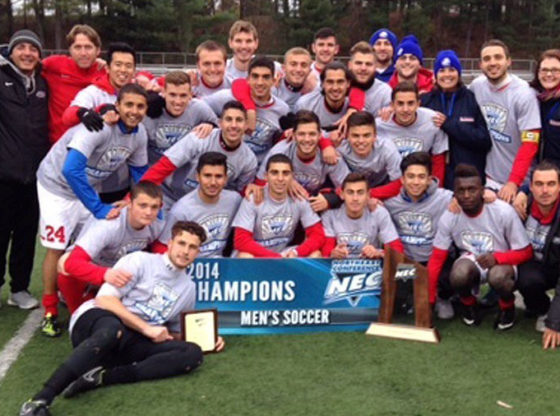 St. Francis College Brooklyn men’s soccer team won the NEC Championship for the second consecutive season on Sunday, knocking off St. Francis University 2-1 in overtime. Senior co-captain Andy Cormack was the hero once again as he scored the game-winning goal in overtime for the second season in a row.

This afternoon the Terriers took on the first place St. Francis University Red Flash and the game certainly lived up to high expectations. It was a defensive battle from the opening minutes, but the Terriers were just able to come through when it mattered most on this day.

For the second consecutive season, Cormack scored the decisive goal to win the championship. Great players need to come through for their teams in the most crucial moments, and Cormack has proved to do so on a number of occasions.

Early in overtime the Terriers were awarded a free-kick outside the penalty box, and Cormack lined up to take the kick. Cormack let one rip and beat Red Flash goal keeper Andrew Garcia to win the game.

With today’s game-winner, Cormack can add another clutch moment to his resume. Not many players have scored one game-winning goal to win a championship, let alone two. Cormack is one of the few that has, and there is no better name for him than “Captain Clutch”.

This moment will last a lifetime for Cormack and the Terriers who have proved this season it’s not a matter of how you start, but how you finish that matters most.

The Terriers started the year (0-4-1), and an NEC Championship did not look likely early in the season. This team has a solid foundation and was able to turn it all around, finishing the season (11-1-3) and have won the NEC title.

“It’s amazing — first of all PA (St Francis University) was outstanding, outstanding. Thank god we weathered a couple of storms and my man over here (Cormack) comes up in the big spots. He did it again, he’s amazing. So, were just as happy as can be today,” said head coach Tom Giovatto.

Coming into this game the Red Flash had the best overall record in the conference at (13-5-1). The Terriers were tested early and often in this afternoon’s game. The Red Flash were able to jump out in front in the 42nd minute on a goal scored off a penalty kick by sophomore defender Francis de Vries.

The goal was a result of a flurry of offensive opportunities that resulted in the Terriers getting called for a penalty in the box. The Red Flash were ultimately rewarded with a penalty kick and de Vries would beat Terriers’ goal keeper Jack Binks for the first goal of the game.

Defense consumed the first 40 minutes of the first half, but play really opened up in the final five minutes and goals were finally scored by both sides. The Terriers were able to go into halftime with momentum on their side as they tied the game in the 43rd minute.

Both teams came out looking to take the lead in the second half. The Red Flash had a number of chances to jump out in front but could not convert. Over the course of the game the Red Flash had three golden opportunities to score, but all three times they missed the net high not even testing Binks.

Those blown opportunities can be the lone takeaway for the Red Flash in an overall solid effort. Both sides would generate scoring chances in the second half but none of any significance.

At the end of the 90 minutes the score was knotted at one and the game was headed to overtime. It did not take long for the Terriers to find their groove in the extra period as they were awarded with a free-kick in the 4th minute of play.

The rest is history. Andy Cormack was able to score on the free-kick and send the Terriers to the NCAA Tournament for the second year in a row. All eyes and rightfully so are on the hero Cormack, but this team as a whole persevered. The backline which is anchored by goal keeper Jack Binks played a pivotal role in route to victory.

“It’s great you know. Two years in a row. If you would have told me when I first came here you would be a champion two years in a row I would’ve thought you were crazy. But we’ve done it again. It’s unbelievable,” said co-captain Cormack.

Red shirt senior co-captain defender Riccardo Milano, sophomore Paul Galimi along with Cormack completely shut down the Red Flash on offense. Midfielders Coisne, freshman Vincent Bezecourt, junior Harry Odell and sophomore Salvatore Barone controlled the middle of the field. Their conscious efforts on both offense and defense have a lot to do with the Terriers being victorious.

Terriers’ leading goal scorer John Makaya once again was heavily all day long. This was a trend down the stretch, but other players were able to benefit from it. He played an outstanding game today stretching the Terriers offense and setting up scoring attempts.