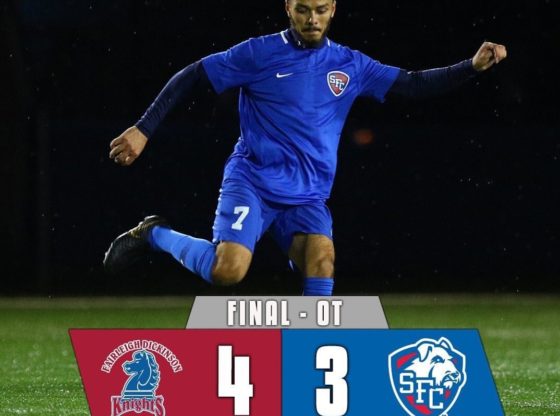 With this defeat, St. Francis holds the sixth place in the Conference.

However, the fourth position for playoff qualification is only one point out of reach, so not everything is lost for the Terriers.

In the last two matches remaining, against Sacred Heart and LIU, Terriers must collect as many points as possible to have a chance of making the playoffs.

Terriers opened up the scoring with Nicolas Molina’s second goal of the season, heading in a ball off a cross from senior midfielder Rahmi Shawki.

Following Molina’s score, Fairleigh Dickinson took the lead with a pair of goals.

In the 52nd minute, senior midfielder Rahmi Shawki tied the match, taking advantage of a loose ball in the box.

Only two minutes later, Edoardo Belfanti scored directly from a free-kick, giving the Terriers a 3-2 advantage.

The Italian defender now has two goals and two assists for the Terriers over his last three matches.

In the 90th minute, with only 56 seconds remaining to play in the game, Daniel LaSarte tied the match.

Diego Arribas scored the golden goal for Fairleigh Dickinson in the overtime, giving the Knights the victory.

CBS reporter, Michelle Miller urged SFC students to be storytellers in media
Back to back defeats for women’s volleyball