Terriers victorious over the Bulldogs 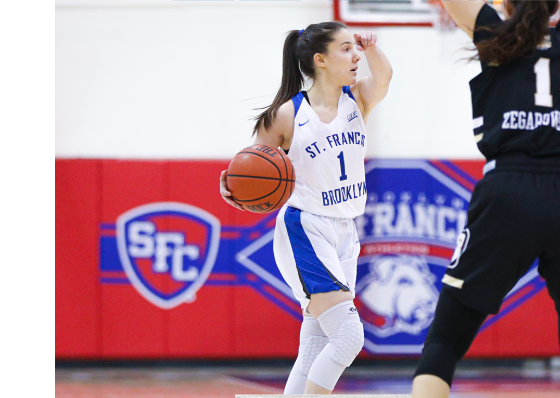 Coming out from the locker room, the Terriers started their comeback as the score was 54-55 at the end of the quarter. Freshman guard Nevena Dimitrijevic recorded a high of 13 points within the quarter. Continuing in the fourth quarter with their comeback, the Terriers would go on a 15-4 run to take a 10-point lead over the Bulldogs, 69-59. They continued as they outscored the Bulldogs 26-22 ending taking the contest 80-77.

Senior guard/forward Sydney Holloway led her team with a double-double in 19 minutes. She recorded 19 points, 10 rebounds, three assists, one steal, and landed seven of eight shots at the free-throw line.

Freshman guard Nevena Dimitrijevic finished with a high of 27 points in 38 minutes. She grabbed three rebounds, assisted in nine baskets, recorded one block and three steals, scored five of eight attempted three-pointers, and landed two of three shots at the free-throw line.

Freshman guard Alyssa finished with a career-high of 17 points in 26 minutes. She grabbed two rebounds, assisted in one basket, recorded one steal, scored three of five attempted three-pointers, and landed two perfect shots at the free-throw line.

Junior forward Abby Anderson finished with eight points in 25 minutes. She grabbed 10 rebounds, assisted in two baskets, recorded one steal, and scored two of four shots at the free-throw line.

The Terriers will be back in action on Sunday, February 23, as they host Wagner at the Pope Physical Education Center, Brooklyn Heights, New York. Game tips off at 1 p.m.