TERRIERS TO KICK OFF SEASON WITH VA DOUBLEHEADER

Home /Sports/TERRIERS TO KICK OFF SEASON WITH VA DOUBLEHEADER 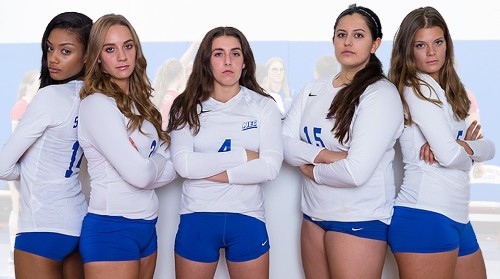 The St. Francis Brooklyn Terriers women’s volleyball team will travel to Virginia Friday to face the Sienna College Saints and the Norfolk State University Spartans in their first two matches of the 2016 season.

vball2016The Terriers had a rough season last year, finishing 7-23 (4-10 NEC). They showed some potential at the end of the season, beating the Fairleigh Dickinson University Knights and Sacred Heart University Pioneers in their final two matches, but accumulated a total of 15 shutouts throughout the 2015 season.

Despite their number of losses, this was an improvement for the Terriers, who suffered 2-28 (0-14 NEC) during the previous season.

The Saints will be a tough first opponent for the Terriers, finishing 16-13 (12-6 MAAC), shutting out teams such as the University of Hartford Hawks, Howard University Bisons and St. Peter’s University Peacocks. The Saints made it to the MAAC Championships, but dropped their first match to the No. 6 Niagara University Purple Eagles.

Senior outside hitter Domenique Gerard – the team’s star player in 2015 – is among the team members who are returning. Gerard led the team with 287 kills and 208 digs. Senior middle hitter Niehely Sosa recorded 160 kills and 47 digs last season.

Senior outside hitter Milica Mladjenovic accumulated 98 digs and 65 digs in 2015.

The Terriers will face a challenge this season, since middle hitter Maggie Niu – one of the team’s most powerful players – graduated last year. Niu recorded 216 kills and 148 digs during her final season at SFC.

However, the team has gained four new freshmen who succeeded on their high school teams. Middle blocker Wies Hurkmans – who comes from Lake Orion High School in Michigan – was an All Oakland Valley Conference performer and an All Regional Selection during her senior year. She hit 37.3 percent, achieving 203 kills and 86 blocks.

Another incoming freshman is middle blocker Sidney Benson, who comes from Eagle Ridge Academy in Colorado. Benson won the 3A Conference Championship three years in a row. During her senior year, she was named 3A Player of the Year and was invited to participate in the Colorado Coaches All-State game. She was named State Wide Blocker of the Year during her junior year. Benson hit 39 percent route to 471 kills, 299 blocks, 151 aces, 88 digs and 26 assists during her three-year high school career.

The Saints’ star player last year – outside hitter Briana Flagg – will return for her final season. Flagg racked up 409 kills and 266 digs in 2015.

The Terriers will face the Saints in Blacksburg at 12:00 pm and the Spartans in Radford at 7:30 pm.