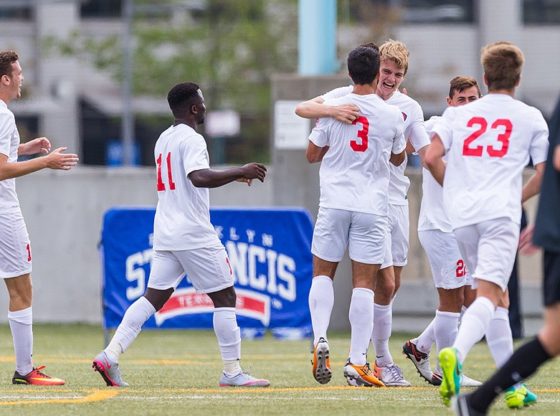 After not allowing a single goal in their seven NEC games and winning their first regular season Tournament since 1998, the (10-4-3, 6-0-1 NEC) St. Francis Brooklyn Terriers men’s soccer team has achieved home field advantage in the NEC Tournament.

soccergroupAfter a bumpy road in non-conference play, which included wins, losses, ties and even a three-game losing streak, the men entered the NEC games on October 7 ready to take on any team.

Coming from a 2-1 loss to the George Washington University Colonials, the Terriers shutout each team they played, with the exception of a 0-0 tie against the Bryant Bulldogs on October 30.

“We are very young and have a lot of new players,” Head Coach Tom Giovatto told SFC Today. “We needed some time to adapt to each other and the style of the college game.”

After fouls were continuously called on both the Terriers and Bulldogs, the Terriers failed on seven shots, and their opponent missed another 13 opportunities to score, leading to a draw after two rounds of overtime.

“Bryant is a very tough team at home. I thought we played a solid game,” Giovatto said. “We were very good defensively. Unfortunately we couldn’t finish on a couple of good chances.”

The team’s next game was the final one of the regular season — a battle with their rival the LIU Brooklyn Blackbirds at Brooklyn Bridge Park on Sunday.

Both team’s put forth good defense throughout the entire 90-minutes, as the two Brooklyn teams attempted five goals each.

The Blackbirds couldn’t manage to get the ball past Terriers goalkeeper Roberto Bazzichetto. The 6’0 junior saved four of the rival’s shots.

Senior forward Yussuf Olajide scored the game’s only goal in the 28th minute, with an assist from junior defender Dominick Falanga.

“We got a great goal on the counter, Yussuf finished it off, Dom made a great run down the line,” Head Coach Tom Giovatto said in a post-game interview. “We’re very happy with the result.”

The Terriers’ success was made possible by a good play by Falanga and Olajide as well as the team’s powerful defense, Giovatto explained.

“The guys stuck to the game plan,” the coach said. “We were great defensively.”

Although the Blackbirds took several shots and got close to the goal towards the end of the game, the Terriers’ defense was too aggressive to allow any points.

“You’re gonna give them opportunities,” Giovatto said. “You just want to make sure that you make it pretty tough for them. I think we did a good job of that.”

Giovatto and his team are happy that they will have the opportunity to host the Tournament for the first time in nearly two decades.

“It’s amazing, it’s a great feeling,” Giovatto told SFC Today. “It’s great for the guys and great for us.”

The Terriers will host the Sacred Heart Pioneers in the NEC Quarterfinals Friday. The (5-10-2, 3-4 NEC) team should not be a challenge for the Terriers, as they have allowed 13 goals in their conference games took a 5-0 hit from the Blackbirds on October 21 and fell 2-0 to the Terriers in the first NEC game of the season.

The Pioneers have scored 19 goals this season, while the Terriers have netted 24.

Junior midfielder Dylan Santos has recorded a team-high three assists for the Pioneers.

SFC’s Olajide has scored a team-high six goals this season. Senior midfielder Salvatore Barone has added another four goals for the team, in addition to two assists.

Falanga has netted three goals and a team-high five assists.

Terriers goalkeeper Seth Erdman has saved 37 balls since late August, and Bazzichetto has made another 21 saves.

The battle between the Terriers and Pioneers will begin at 3 pm.