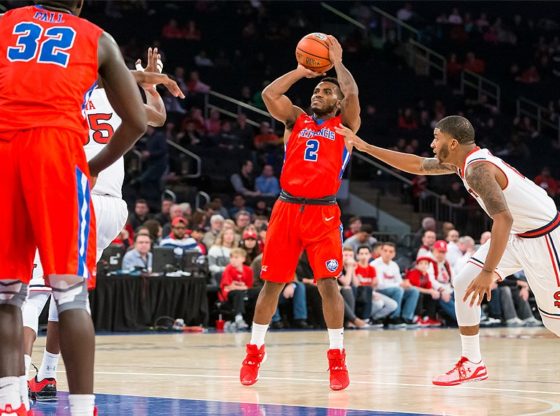 Even though the Colonials aren’t far behind the Terriers in the NEC, the game will likely be difficult for them. The Terriers are coming from a 70-58 point victory against the Saint Francis University Red Flash Thursday night, leading their opponent for the entire second half.

That’s the same team the Colonials dropped two NEC games to this season, both by more than ten points. They do come from two consecutive defeats against the LIU Brooklyn Blackbirds and Fairleigh Dickinson University Knights but both were close games – 74-67 and 72-70 respectively.

The Terriers did however drop to the Blackbirds by 15 points earlier this week so it can’t be said that they’ll be a threat to the home team.

The teams last met on January 9 and the Terriers won 56-49, grabbing their seconds NEC win and dragging Robert Morris down to (1-3 NEC) at the time.

Senior guard Tyreek Jewell leads the Terriers with an average of 13 points, 5.3 rebounds and 2.2 assists per game. The second star player this season has been senior forward Chris Hooper who averages 11.5 points, 4.9 rebounds and 1.3 assists per contest.

Junior guard Yunus Hopkinson has also been an important part of the Terriers this season, with an average of 11.4 points, 2.9 assists and 2.4 rebounds a game.

For the Colonials, senior guard Rodney Pryor has been the star player with 18.3 points and eight rebounds per contest. Sophomore forward Elijah Minnie has averaged 12 points and 6.6 rebounds.

The Terriers and Colonials will tip off in the Sewall Center at 4 pm.