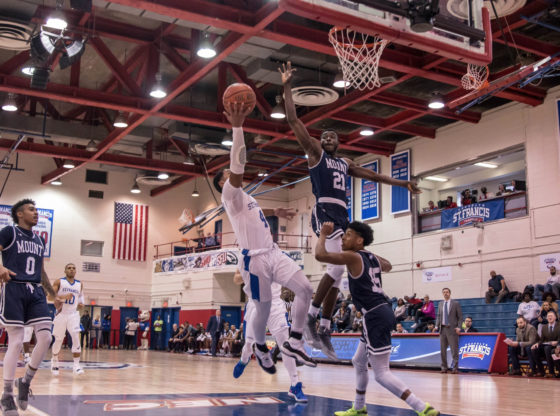 The St. Francis Men’s basketball had a devastating end to their regular season as they took a suffering loss to the Mount St. Mary’s Mountaineers in a final score of 73-71.

With this loss, the Terriers have now been set as the 5th placed team in the final NEC standings. They will take on Robert Morris University in the first round of the 2019 NEC Playoffs, which will be played this Wednesday at 7:00 pm at RMU.

The Terriers had the chance to win the game after trailing by two points with 4 seconds remaining in the game. Following a timeout called by Coach Glenn Braica, sophomore guard Chauncey Hawkins attempted to give the team the victory but couldn’t connect with the shot.

St. Francis led the game by as much as 16 points entering the second half but the Mountaineers were able to turn it around to give them the win. Freshman guard Vado Morse on Mount St. Mary’s scored 18 out of his 23 points in second half.

On the other end for the Mountaineers, Morse led the way as he finished the game with 23 points and 5 rebounds. Freshman forward Malik Jefferson ended with 20 points, 7 rebounds, and 2 blocks.

Good luck to the Terriers this Wednesday as they enter their first playoff game this season.