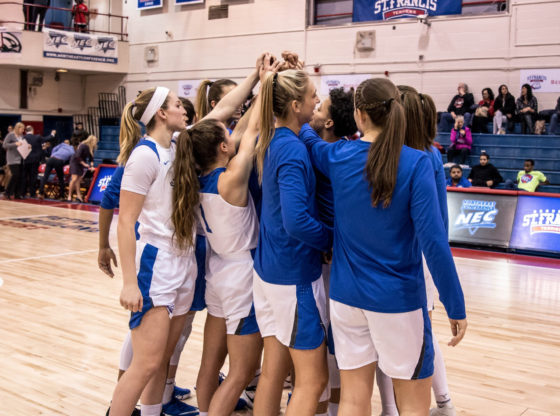 In an emotional loss to Mount St. Mary’s University, the St. Francis women’s basketball team were eliminated from the 2019 NEC playoffs in a final score of 80-74.

It was a back-and-forth contest in the first 20 minutes of the contest. Mount St. Mary’s led by as much as 9 points with 7:10 to go in the first half but were tied with 35 a piece at halftime.

Mount St. Mary’s had the lead the majority of the mage until Sophomore Ally Lassen made 2 free throws at the 9:26 second mark in the third quarter to give the Terriers their first lead of the game. The score stayed relatively close as both the Mountaineers and the Terriers exchanged baskets to give each of them the lead.

With only being down by eight points late in the game, the Terriers gained momentum as they went on a 6-0 run with less than 23 seconds to go in the fourth quarter. Redshirt Junior Mia Ehling made two consecutive free throws to bring the Terriers down by two.

Freshman Ebony Horton stole the ball within seconds after Mount St. Mary’s checked the ball back in. What could have sent the game to overtime, Senior Maria Palarino was going up for a layup but lost the ball on the way up to the hoop. The Terriers committed two fouls following that possession to give the Mountaineers a six point advantage to win the game.

Three Terriers finished in double-digit scoring tonight with two of them scoring 20 a piece. Maria Palarino ended with 20 points and 6 rebounds to end her career here at St. Francis College. Junior Jade Johnson also ended with 20 points shooting 5-20 (25%) from the field and shooting 3-8 (37%) from behind the 3-point line.

Ebony Horton had herself a night as well, finishing with her first career double-double this season (14 points and 10 rebounds). Horton was named to the All-NEC Rookie team this season and averaged 17.0 points per game within the last three games.

For the winning team, Mount St. Mary’s, they were led by Freshman Michaela Harrison who finished with 23 points, 3 rebounds, and 3 assists. She was followed by Sophomore guard Bridget Birkhead who ended the game with 14 points and 5 rebounds.

It was an amazing season for the St. Francis women’s basketball team who was led this year by their new and first year coach for the Terriers, Linda Cimino.

“I am extremely proud of our program, we inherited some really talented players. Coach Thurston left us with a really really good foundation and we were able to bring a couple of pieces to add to that foundation” – Head Coach Linda Cimino on her first year as head coach for SFC

The future is bright for Head Coach Linda Cimino and for the rest of the Terrier squad. We also wish the best of luck to the seniors who played their final game in tonight’s matchup.

As for Mount St. Mary’s, they will now play the #1 seeded Robert Morris University in the Semi-finals of the 2019 NEC playoffs.