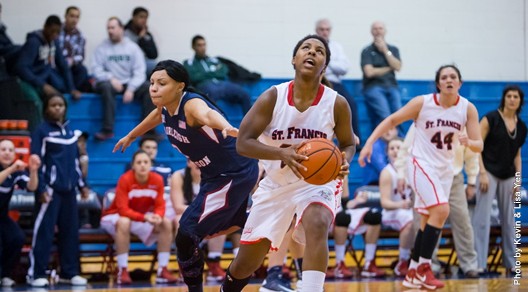 Basketball: St Francis College women held on to beat the Delaware State Hornets 68-55, winning their 5th game in a row.

Final- The Terriers led this game wire to wire, picking up a very nice road win putting them at 9-2 on the season.

We have seen a dominant brand of basketball from the Terriers all season long and today was just another example of that.

Today’s victory marks their 5th win in a row as they continue to roll through the competition.

The Terriers were led this afternoon by Junior forward Jaymee Veney and Sophmore guard Leah Fechko. Both had amazing afternoons as they led the Terriers to victory.

Veney scored a team high 20 points and grabbed 12 rebounds which marks her second double-double on the season. Fechko also recorded a double-double this afternoon as she recorded 11 points, 13 rebounds and 7 assists.

Junior guard Eilidh Simpson had a very nice game of her own as she scored 11 points. Senior guard Jasmin Robinson contributed a great deal in her 15 minutes of play as she scored 8 points off the bench.

The Terriers had a nicely balanced, scoring attack with three players scoring in double digits.

The 25 point first half lead was just too much to comeback from for the Hornets, even though they did some nice things in the second half the Terriers were still able to do enough to hold onto this one.

Delaware State’s Junior forward Tierra Hawkins still managed to have a very good game despite the defeat. She scored a game high 26 points and grabbed 12 rebounds.

Freshman guard Raven Bankston had a sluggish start scoring 0 points in the first half, she scored 11 points in the second half, but shot a total of 5-19 from the field on the day.

The Terriers played their brand of basketball all day long which is what they have done all season long.

Some things to watch going forward is what happened to Junior forward Sarah Benedetti? She did not play in today’s game.

The Terriers next game is Jan. 4th at home against Mount St. Mary where they will look to extend their winning streak to 6 games.

Halftime- The Terriers have absolutely dominated the first half of play as they have a commanding 25 point lead.

After 9 days since their last game the Terriers have not missed a beat as they have come out this afternoon on a mission to extend their winning streak to 5 games.

Junior forward Jaymee Veney has led the way for the Terriers scoring a team high 14 points and grabbing 9 rebounds.

Sophmore guard Leah Fechko has filled up the score books as she has recorded 7 points, 6 assists and 5 rebounds in the first half. Eilidh Simpson and Jasmin Robinson have both added 5 points apiece.

The Terriers have been very efficent on the offensive side of the ball. They are shooting an impressive 48% from the field, 54% from behind the arc and 85% from the free throw line.

They have completely shut down the Hornets who have been able to manage little offense in the first half. We have seen a tenacious brand off basketball from the Terriers on the defensive end of the floor.

Hawkins managed 11 points and grabbed 9 rebounds. As for Bankston, she has been locked down as she is shooting 0-8 from the field recording 0 points.

If the Terriers can continue to keep up the tenacity on the defensive side of the ball, and their offensive continuity, they should have no issues picking up a victory today.

Something to watch for is Junior forward Sarah Benedetti has yet to appear in today’s game.

Preview- The Terriers look to keep the ball rolling this afternoon as they are currently on a four game winning streak.

They take their winning streak on the road, where they will face the Delaware State Hornets who come into todays matchup at 3-7 on the season.

The Terriers are coming off a very nice 74-52 win at home against Lafayette, and are eager to keep the momentum going this afternoon against Delaware State.

Some impact players to watch for are, Terriers Junior guard Eilidh Simpson who is coming off a very nice performance where she tied her season high in points with 24.

Also Terriers Junior forwards Sarah Benedetti and Jaymee Veney are players to watch out for. Benedetti is averaging 11.6 ppg and 4rpg, as for Veney she is averaging 12.3 ppg and 6.9 rpg.

Delaware State comes into today’s game on a four game losing streak. Their top performers are Junior forward Tierra Hawkins who is averaging 21.5 ppg and 9.9 rpg.

Both of these women are phenomenal so controlling them will be the key to victory for the Terriers.