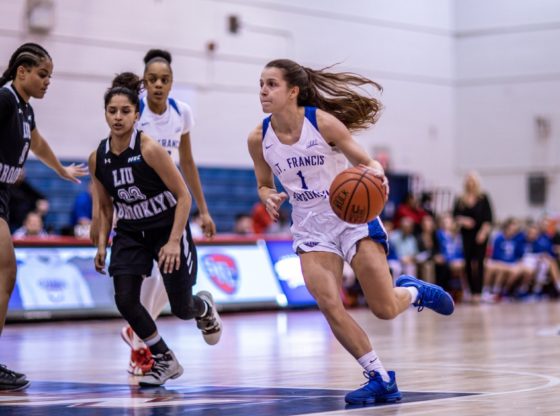 Jade Johnson made the opening basket for the Terriers, assisted by Amy O’Neill, immediately following the opening tip-off of the game.

Since that play, the Terriers were able to outscore the Blackbirds by 8 points to end the first quarter shooting a total of 9-16 (56%) from the field and 100% (7-7) from the free throw line.

The Terriers maintained their lead in the game as they closed the first half with a 44-36 point deficit over LIU. Senior Amy O’Neill connected with a layup to beat the buzzer finishing the first half.

The lead continued to grow as the Terriers were able to finish the game with a 23 point victory over the Blackbirds. St. Francis had never trailed at any point in the second half of this game.

After this win over LIU, the Terriers will improve with a record of 8-4 in conference play and remain in 4thplace.

The next game for the Terriers will be on Monday, February 18th, at 1:00pm against Central Connecticut State University.