Terriers records first win in a month against Sacred Heart 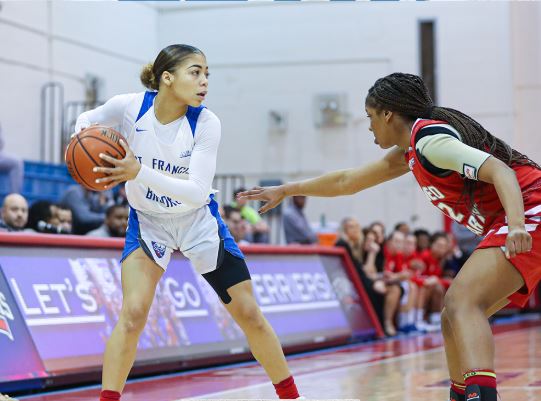 Saturday afternoon inside the Pope Physical Education Center the St. Francis Brooklyn Women’s Basketball Team (6-14, 2-7) ended their month-long losing streak as they defeated the Sacred Heart Pioneers (8-12, 5-4) by a score of 71-70. The Terriers last recorded a conference win on January 8 against the LIU Sharks.

Entering the third quarter the Terriers and the Pioneers were back and forth. However, on a 5-2 run, the Terriers would take the quarter, 57-54. In the fourth quarter, both teams were head to head. At 1:55 the Terriers secured a five-point lead off a layup from Nevena Dimitrijevic, 71-66. In a desperate attempt to come back, the Pioneers went on a 4-0 run to cut the lead to one. The Terriers took the contest 71-70.

Junior guard Adrianne Hagood her team with 26 points in 36 minutes. She also finished with two rebounds, two assists, one block, and scored three of nine three-pointers.

Junior guard Jayla Davis finished with 10 points in 26 minutes. She finished with three rebounds and landed two of four free-throws.

Junior forward Ally Lassen finished with a career-high of 30 points in 36 minutes. In the first half, she recorded 24 points and in the second half, she recorded six. She also grabbed five rebounds, assisted in two baskets, recorded three blocks, and landed eight from 10 shots at the free-throw line.

The Terriers will be back in action on Monday, February 3, as they take on the Merrimack Warriors at North Andover, Massachusetts. Gap tips off at 7 p.m.