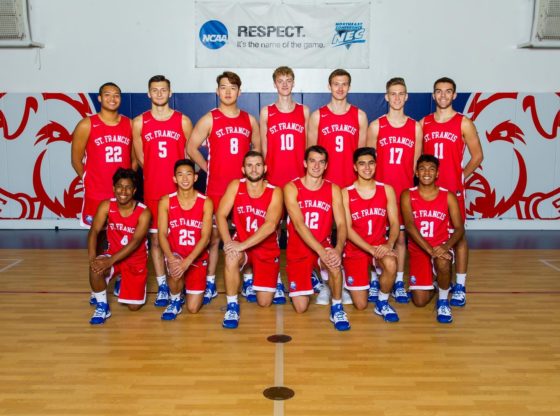 St. Francis Brooklyn Men’s Volleyball Team is set and ready to start its inaugural season on Friday, January 10 as they take on the Sacred Heart Pioneers at 6 p.m. in Fairfield, CT.

Head coach, Niko Lambert said, “I am extremely excited to announce the 2020 schedule and the inaugural season for St. Francis College men’s volleyball. We have a highly competitive schedule, playing some top-quality competition across all three levels.”

The team consists of 11 student-athletes: nine freshmen and two juniors.

Setter #1: Coming from Ontario Canada freshman Andrew Piloto weighs173 pounds and is 6’2” tall. He attended Damien High School where he played three years of varsity volleyball. Piloto also played for Pulse Athletics Volleyball Club. There, he was a two-time Most Valuable Player, All-League First Teamer, and an All CIF-SS First Team selection.

Opposite Hitter #5: Freshman David Vorfi comes from Queens, New York and is 6’4” weighing 181 pounds. He attended Aviation High School where he played varsity volleyball for four years. He also played varsity basketball and soccer for three years. Vorfi was named the Most Valuable Player for volleyball and recorded the most kills in New York City during the 20117-2018 season. He also played for NYC Impact.

Opposite Hitter #8: Freshman Daniel Lee is a 6’5” native of Incheon, South Korea weighing 210 pounds. He attended Redlands High School where he played varsity volleyball and basketball for three years. In his sophomore year, he was named the Most Improved Player of the Year and earned All-League Second Team honors, In his junior year, he was All-League First Team, All-Area Second Team was a two-time Player of the Game, and was selected to the All-League Second Team in basketball. In his senior year, he led the Citrus Belt League (CBL) with 320 kills. In 2019 his team won the CBL Championship and he was named All-League First Team, All-Area First Team, and All-League MVP.

Outside Hitter #9: Hailing from Warsaw, Poland, freshman Bartlomiej Zielinski is 6’5” and weighs 199 pounds. He attended XXVIII High School. Jan Kochanowski. In 2019, he participated at a camp for the Polish U21 National Team.

Middle Blocker #10: Freshman James Henneberry comes from Wildwood. Michigan and is 6’7” weighing 162 pounds. He attended Lafayette High School where he was a member of the volleyball, basketball and cross-country teams. In his junior year, his volleyball team finished in second place in the 2018 State Finals. Henneberry plays club volleyball for High Performers St. Louis and in 2019, he was named All-State First Team and was tabbed to the All-Tournament Team in every tournament he participated in.

Outside Hitter/Middle Blocker #11: Freshman Timothy Walsh comes from Southington, Connecticut and is 6’4” weighing 181 pounds. He attended Southington High School where he played four years of volleyball and one season of basketball. He recorded a school record of 900 kills was a three-time All-Conference selection, two-time All-State honoree, named to the BJNC All-Tournament Team, and named the MaxPreps Player of the Week in the NE Region.

Libero #17: Freshman Dominick Pikura comes from Lindenhurst, New York and is 6’2” weighing 151 pounds. He attended Lindenhurst High School where he played three years of volleyball. He was named All-Division and claimed a League Championship with his team and tallied 90 kills in five matches in his senior year. Pikura also plays club volleyball for Academy Volleyball.

(CAPTAIN) Outside Hitter #14: Junior Michael Basile comes from Agawam, Massachusetts and is 6’1” weighing 200 pounds. Prior to St. Francis College, he attended Sage College where he spent the first two years of his collegiate career. At Sage, Basile played volleyball for two years recording 164 kills, 146 digs, 19 aces, and 12 blocks. He also attended Agawam High School where he was a three-sport athlete (volleyball, basketball, and football) and a three-sport captain. During his volleyball career there, he tallied 515 kills and All-State and was twice named All-Western Mass. Basile was tabbed Pre and Postseason “Super 7”.

(CAPTAIN) Libero/Setter #25: Junior Derrick Truong comes from Philadelphia, Pennsylvania and is 5’11” weighing 138 pounds. Prior to St. Francis College, he attended Temple University where he volleyball from Spring 2018-Fall 2018. He also attended Central High School where he was a member of the varsity volleyball and bowling teams. Truong plays club volleyball for East Coast Power and was named to the All-Public Philadelphia First Team in 2016.