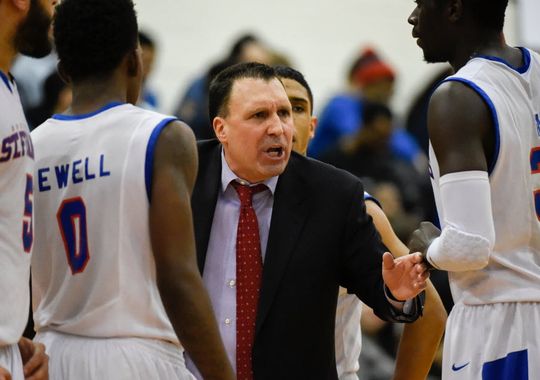 With the regular season now concluded and the playoffs approaching, the 2014-15 St. Francis Terriers continue their historic season by raking in some serious individual hardware.

The end of season awards were announced on March 3rd and the first place Terriers were awarded for their season of excellence.

St. Francis Brooklyn senior forward Jalen Cannon was the unanimous pick for NEC Player of the Year. The Allentown, Pennsylvania native posted career highs in both points 16.5 and rebounds 10.2 this season.

His 10.2 rebounds per game was number one in the NEC this season and his 16.5 points per game was good for fourth. Cannon was instrumental to the Terriers claiming the regular season crown as he was a constant fixture in the Terriers game plan both offensively and defensively.

Junior Amdy Fall was selected as the NEC Defensive Player of the Year. He led the NEC with a career high 3.0 blocks per game. Offenses were less likely to drive to the basket when Fall was in the game in fear of their shots being rejected or altered.

Senior guard Brent Jones was named to the ALL NEC team for the first time in his career. The senior point guard finished his last collegiate regular season with a bang. His improved play could be seen from the beginning of the season as he was more aggressive than ever before.

Jones shattered his career high in points by scoring 13.6 points per game. He also had a career high in rebounds per game with 3.5 this past season. Jones improved his scoring from 7.5 to 13.6 while still being a top passer in the conference.

Jones finished second in the conference with 5.2 assists per game. Brent was a key to the whole Terriers 2014-15 campaign as we saw him play as aggressive as ever.

It is only fitting that the man that coached this team to such an unbelievable regular season was named coach of the year. For the second time in his illustrious career Terriers head coach, Glenn Braica was named the Jim Phelan Coach of the Year.

Braica’s St. Francis Terriers had their best season in a decade and he will be the first to tell you that this team is just getting started. With his eyes on the playoffs, Braica will not let these honors be a distraction for himself of his team.