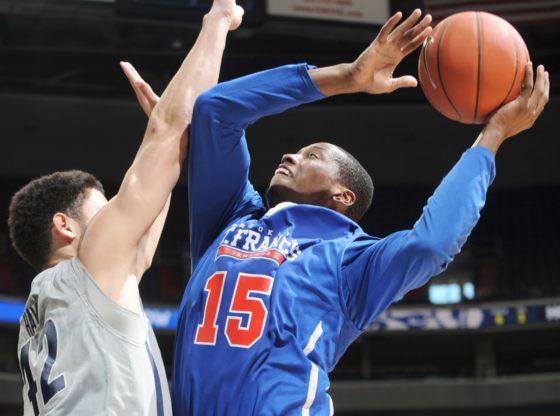 The St. Francis Terriers men’s basketball team lost an absolute heartbreaker against the New Jersey Institute of Technology Highlanders on Thursday night with the final being 92-86 after overtime was in the books.

The Terriers had trouble scoring throughout the game against a very tight 2-3 zone, which was executed well by the Highlanders. The 2-3 zone defense forced the Terriers to settle for a lot of outside jumpers, and the Terriers lived and died with the three-ball all night.

This victory puts the Highlanders at (6-4) on the regular season, while the Terriers fall to (3-6).

In the game’s first half, the Terriers were off to a very shaky start from the floor, at one point shooting 4-of-20 from deep. The Highlanders amassed a double-digit lead at one point in the game, but the Terriers turned their offensive rebounds into buckets, quickly cutting back into single-digits.

After trailing for virtually the entire first half, the Terriers re-gained the lead in spite of a poor shooting performance in the first half. Junior guard Jon Doss caught absolute fire by nailing three consecutive 3-point jumpers before the halftime horn to give the Terriers a 37-35 lead.

By dominating on the glass, out-rebounding the Highlanders 29-17 in the first half, the Terriers gave themselves several opportunities to stay in the game.

In the second half, it was more of a back and forth affair from the get go as both teams picked up where they left off in terms of intensity and pacing.

After several lead changes, the two tri-state area combatants found themselves tied 73-73 after the regulation period, heading into overtime.

In the second half, the Terriers were led by the emerging play of senior guard Tyreek Jewell who scored 15 second half points on an efficient 6-of-12 shooting (50%) from the field. Junior forward Tim Coleman came alive for the Highlanders, scoring 13 points on 5-of-8 shooting (62.5%) in the second stanza.

In the grueling overtime period, the Highlanders were just one-step ahead of the Terriers, and their 19 point outburst in only five minutes of play proved to be the deciding factor, giving them a 92-86 victory over the Terriers.

The early found rebounding advantage did not last for the Terriers, but they were able to increase their field goal percentage before the action concluded, shooting (37.3%) from the field after a tough start.

The Terriers also drilled in a season-high 16 three-pointers in the game after a jaw dropping 49 attempts from beyond the arc.

The efficiency of the Highlanders really kept them afloat throughout tonight’s entertaining match-up.

The Highlanders were led this evening by the aforementioned Coleman who finished with a game-high 27 points on 10-of-18 shooting (58.8%), and 3-of-5 from deep (60%). Coleman also grabbed a game-high 12 rebounds over the course of the game played in Thursday night-lights.

Senior guard Ky Howard, who played all 45 minutes, scored 25 points on only 8-of-13 shooting (61.5%), and this included a perfect 6-of-6 from the free throw line. Howard also grabbed ten rebounds and dished out a team-high five assists.

Junior guard Damon Lynn, who also logged in all 45 minutes for the Highlanders tonight, added 15 points and three assists on the evening. Classmate Rob Ukawuba also finished with 15 points in his 29 minutes of action. The two-guard also grabbed four rebounds against the Terriers.

The Terriers had five players reach double-digits on the night, which helped their cause tremendously despite of a valiant effort that ultimately didn’t get the win.

Jenifer recorded a team-high 11 rebounds, and Hooper collected nine boards of his own. Junior guard Jon Doss finished with 15 points behind the strength of five made three-pointers, which were all netted before halftime. Junior point guard Yunus Hopkinson only shot 3-of-15 (20%) from the field, but left his mark by spreading the love, dishing out a game-high 11 assists.

After two straight gut wrenching defats, the Terriers will look to get back on the winning track against Manhattan College in their next game. The game will be played on Monday, December 14.