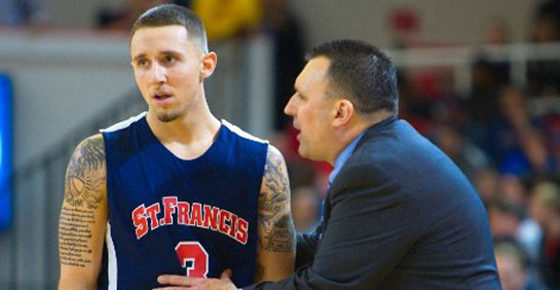 St. Francis will head to LIU Brooklyn with revenge on their mind after losing the first matchup of the season this past Wednesday in Madison Square Garden. Ben-Mockford-St-

The loss snapped the Terriers five-game winning streak. This will be the 96th meeting between SFC and LIU with the Blackbirds leading the all-time series 59-36. St. Francis stood within striking distance the whole game but LIU’s defense proved to be too much.

Senior swingman Stefan Perunicic was held scoreless for the second time in three games in the Terriers 86-77 loss on Wednesday. Perunicic is averaging just 4.3 points per game in his last four games after averaging a team-high 14.4 points in the previous 19 contests.

“He’s really played at a high level throughout the season and he’s really hit a rough patch lately,” said head coach Glenn Braica after Wednesday’s game. “He’ll fight through it, but the last few have been tough.”

Junior forward Akeem Johnson scored a career-high 24 points on 11-17 shooting with eight rebounds on Wednesday. He is averaging 16.0 points per game in his last five contests. He is also averaging career-highs this season in every statistic, including points (11.2 per game) and rebounds (5.3 per game.)

Sophomore shooting guard Ben Mockford also chipped in with 20 points with 2 steals in 32 minutes of action. He continues to provide long-range shooting for the Terriers, knocking down a trio of three-pointers in the game.

St. Francis often found themselves in foul trouble during the game against LIU. The Blackbirds had 37 free throw attempts in the game opposed to just 10 by St. Francis.

LIU also had two players with double-doubles in the game. Jamal Olasawere led the team with 21 points and 12 rebounds while Julian Boyd posted 17 points and 11 rebounds.

St. Francis will look to start a new streak in the rivalry week matchup Sunday and perhaps ride a strong finish into the NEC tournament. The Terriers have five games left in the regular season, including this one.