TERRIERS HAVE A HAPPY HALLOWEEN WITH VICTORY OVER FDU

Home /Sports/TERRIERS HAVE A HAPPY HALLOWEEN WITH VICTORY OVER FDU 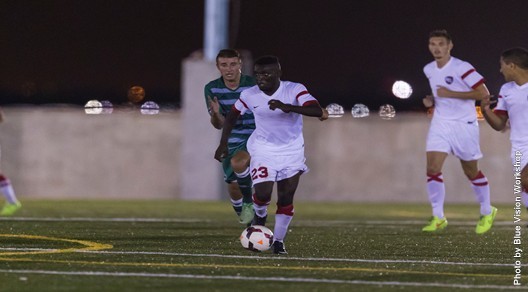 The St. Francis Terriers definitely will be celebrating this Halloween night after edging longtime Northeast Conference rival Fairleigh Dickinson University 1-0. With the victory the Terriers have clinched a berth into the NEC Tournament for the second consecutive season.

Their lone goal was scored by junior forward John Makaya in the 62nd minute and assisted by sophomore defender Paul Galimi. The goal was Makaya’s eighth on the season, which leads the team. The game was quite intense and each player played with some positive and necessary aggression.

Though no one was badly hurt four athletes were injured during the 90 minute matchup. Two players from the FDU Knights had to be taken off the field due to having sustained injuries. Senior defender Riccardo Milano and freshman defender Dominick Falanga were also injured for the Terriers. It is important to note that both players were attended to in a speedy manner and sent back onto the field.

Only two substitutes were made by each team in the first half. However, as the game progressed and each team battled the number of substitutes made in the second half were innumerable. The Terriers were out corned by the FDU Knights (5-3), and were surprisingly out shot as well.

The Knights took a total of 13 shots and the Terriers took 11. It is noteworthy that five of the Knights’ shots were on goal; all turned away by Terriers’ junior goalkeeper Jack Binks. Binks played and impressive match by executing some sharp defensive skills. He used his experience to his advantage and clearly demonstrated why he is one of the best goalkeepers in the Northeast Conference.

The Terriers now have 11 points for the season which makes them currently tied for third place with Bryant University. Their overall season record is now (8-5-4) and (3-1-2) in conference play.

The Terriers have a long break as their next game will be played against their Brooklyn neighbors, the LIU-Brooklyn Black Birds. The Black Birds are currently at the top of the NEC and are ahead of the Terriers by just one single point.