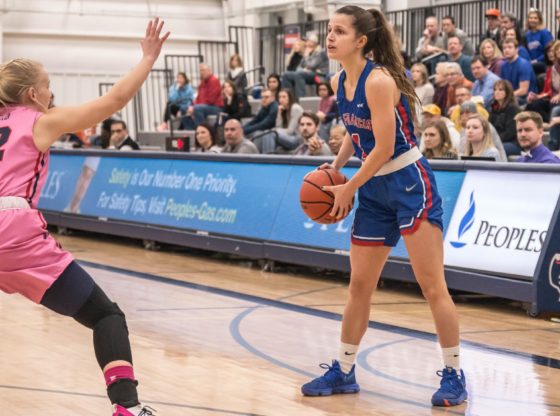 At the end of opening quarter of the game, the Terriers were trailing by three points while shooting 7-18 (39%) from the field.

The Terriers couldn’t stay on rhythm in the second quarter as they shot 4-16 (25%) from the field and 1-5 (20%) from behind the three-point line. Jade Johnson shot 5 out of the 6 free throws made in that quarter from the Terriers. Saint Francis (PA) finished the first half leading by 10.

Saint Francis (PA) continued to show their effort on the offensive side when they lead by as much as 13 point points over the Terriers with 33 seconds left in the third quarter.

When the fourth quarter started in the game, the Terriers were able to start off hot by going on a 13-4 run with only 4:18 to go to put themselves down by one point. Senior Maria Palarino connected with two free throws to put the Terriers down by two points (84-82) with 33 seconds left.

Sophomore Karson Swogger on the Saint Francis Red Flash connected with a free throw of her own to put her team up by three points. The St. Francis Terriers immediately called a timeout with 20 seconds left to discuss their next play. They had nine seconds to spare but the ball was turned over by Jade Johnson.

Jade Johnson fouled Sophomore Haley Thomas on Saint Francis (PA) which gave them the opportunity to lead by four points. Maria Palarino connected with a layup of her own to bring the deficit to just one point but that wasn’t enough to give the Terriers the victory.

As for the Terriers, Jade Johnson scored 31 points with 4 rebounds and 3 assists. Sophomore Ally Lassen was the second leading scorer for St. Francis Brooklyn with 17 points as well as 11 rebounds. Senior Amy O’Neil finished with once again double digit assists (13), with 7 rebounds and 3 points.

The Terriers will go back home this Saturday March 2nd, 2019 to celebrate Senior Day as they take on Bryant University at 1:00 pm at the Pope Physical Education Center.