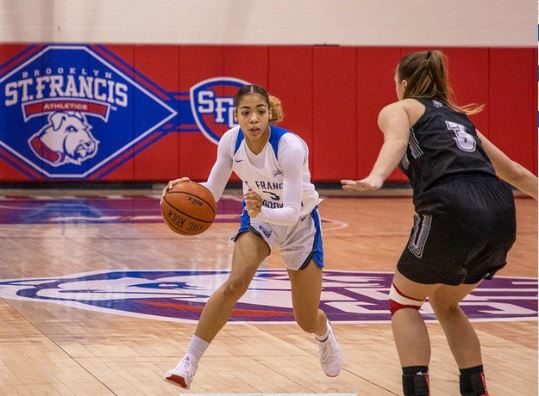 Saturday afternoon at the Pope Physical Education Center, the St. Francis Brooklyn Women’s Basketball Team (5-13, 1-6) were defeated by the Saint Francis (PA) Red Flash (8-11, 6-2) by a score of 59-67. The Terriers are currently holds 10th place in the NEC Conference with Robert Morris Colonials first and the Red Flash in second place.

The contest started with Terriers trailing by three points as the Red Flash recorded the first three points of the contest. However, tying the game at 3-3, the Terriers took the lead on an 11-3 run. They went on to take the first quarter 16-12.

In the second quarter, the Red Flash immediately tied the game on a 4-0 run bringing the score to 16-16. Both teams then went head to head exchanging the lead. Within the last three minutes of the quarter, Abby Anderson with a layup and Nevena Dimitrijevic with a jumper and layup took the Terriers into halftime with a 33-30 lead.

Freshman center/forward Katie Dettwiller led her team with a high of 17 points in 22 minutes. She grabbed nine rebounds, recorded one block and landed three of four free-throw shots.

Sophomore center Jada Dapaa finished with 12 points in 30 minutes. She recorded eight rebounds, three assists, one block, and one steal.

Freshman guard Alyssa Fisher finished with 11 points in 32 minutes. She grabbed four rebounds, assisted in one basket, recorded one steal, and scored five or six shots at the free-throw line.

The Terriers will be back in action on Monday, January 27, as they host the Robert Morris Colonials at the Pope Physical Education Center. Game tips off at 7 p.m.