Home /News, Sports/Terriers fall to Saint Francis (PA) in the “Battle of the Franciscans” 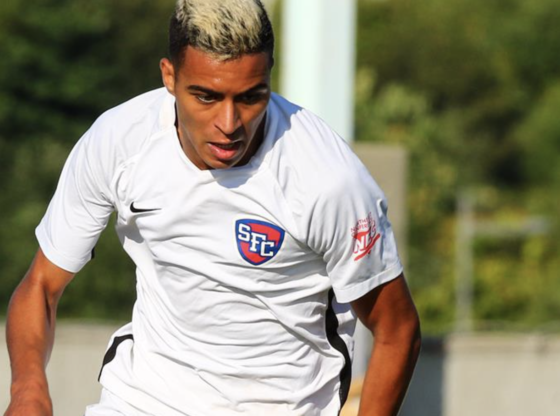 The home opener of the NEC season for the men’s soccer team left a bitter taste as they were defeated by Saint Francis (PA) 2-1 on Sunday.

As the match began, the Terriers had the best chances to score, first directly from a corner kick and then with Edoardo Belfanti firing a shot at goal from the right side of the pitch.

However, it was Saint Francis (PA) that took the lead in the 30th minute when Juan Gomez provided the pass and Gabriel Castro scored from a close distance.

During the half time break coach Giovatto seemed to strike the right note with his players — and just one minute into the second half a powerful header from El Mahdi Youssofi tied the score at 1-1 after a corner by Julien .

didn’t even spend time celebrating but took the ball immediately to the center of the field to restart the game as soon as possible, showing the determination of the whole team to win the match.

Following the goal, the Terriers created some good chances to score but failed to take the opportunities.

Amir Islami shot between two defenders with a strike that ended up very close to the post.

Then Khaled Abdella fired a shot from just inside the box, missing the near post.

The winning goal for Saint Francis (PA) was scored by Gabriel Castro off a free kick into the box from Brandon Ott.

Next Sunday the Terriers are headed to Emmitsburg (MD) to face Mount St. Mary’s for the first time since October 2, 2011.

‘Football molded me as a person’ – portrait of Andy Cormack, assistant soccer coach
El Mahdi Youssoufi – the man from Morocco lighting up the league