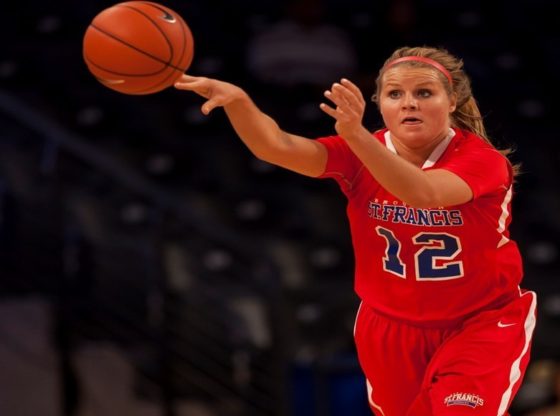 With the loss, the Terriers say goodbye to their two beloved senior standouts, Leah Fechko and Taylor Watson. In her final game, Fechko finished with eight points, nine rebounds and six assists. Watson played three minutes and recorded one rebound.

Sophomore forward Alex Delaney finished with a game-high 16 points for the Terriers, and she also grabbed five rebounds. Junior forward Olivia Levey came off the bench and gave the Terriers a spark with 11 points and seven rebounds.

Kayla Miller added 13 points on 6-of-8 (75%) shooting, and Aleah Epps put forth a solid all-around game with 13 points, seven rebounds and a game-high seven assists.

The game started off as the two teams battled back and forth in what began as a defensive minded showdown. The Terriers entered the halftime break with a 25-21 edge.

The Blue Devils re-took the lead with several key baskets within the last few minutes of the third quarter and led 46-45. The Terriers provided a stiff test down the stretch but were ultimately denied of the W as the Blue Devils held on for the six-point win.

“As I just told them, it was a season of ups and downs,” Terriers head coach John Thurston said. “We had some moments where we played very well; we had some other games that we could win. Had we won the three overtime games we’d be in third place, but you’ve got to make your own breaks.”

Thurston continued to reflect on what was his toughest season as a head coach after their final defeat to CCSU.

“It’ll be eight months before we play again,” he said. What they do between tonight and those eight months will determine what happens in the future. We have a lot of work to do. Hopefully they listen to that and work hard in the off-season.”

Thurston also added some additional words in regards to his departing seniors and co-captains. He says that the door is now open for others to step-up into a leadership role heading into the 2016-17 season, which is scheduled to be Thurston’s fifth year at the helm.

“Leadership opportunities are the greatest opportunities you can have. They’re the greatest learning experiences you can have as a player,” Thurston continued. “We’ve had great leadership in the past, so there’s where that opportunity is. We appreciate everything that Leah and Taylor did, but their careers are officially over, when you wake up tomorrow morning it’s somebody else’s team.”