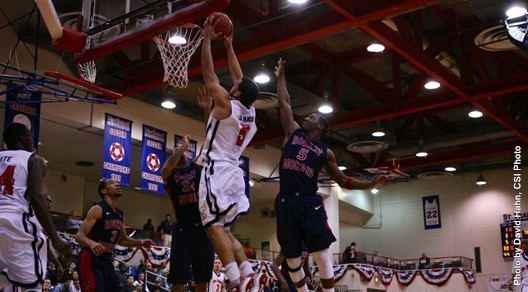 Basketball: The Terriers comeback proves to be too little, too late in loss to Mount Saint Mary’s.

Final: The Terriers came into this afternoon’s matchup riding the emotional high of knocking off the three time NEC champions and arch rivals the LIU Brooklyn Blackbirds.

After an impressive showing at home on Thursday, they fell a little short today losing 88-82 against the Mount Saint Mary’s Mountaineers.

After such a nice win, the Terriers were hoping to go on a little run with the momentum they had gained from knocking off the reigning NEC champions, but the Mountaineers would stop them in their tracks. The Mountaineers explosive offensive attack proved to be too much for the Terriers to handle on this day.

They were led by their leading scorer Senior guard Julian Norfleet, who had a very solid game this afternoon scoring 24 points, shooting 9-17 from the field.

Norfleet was not alone on this day, he had plenty of help to knock of the Terriers. Senior guard Rashad Whack had a solid game scoring 18 points, Freshman guard Byron Ashe added 16 points off the bench and Senior guard Sam Prescott finished with 13 points.

A huge reason for the Mountaineers success this afternoon was their will to get to the free throw line. They attempted a total of 23 free throws, hitting 20 of them. While the Terriers only got to the line a total of 7 times all day.

The Terriers offense was not the issue today, like it has been in past loses for them. They were led by Junior forward Jalen Cannon once again, as he scored a game high 25 points and grabbed 11 rebounds. Even in a losing effort Cannon was still able to have a very good game, getting off high percentage shots and nailing them as he shot 11-14 from the field.

Senior guard Ben Mockford had a very quiet day only scoring 6 points on 2-7 shooting. After a huge game against LIU Brooklyn where we saw Mockford light the Blackbirds up for a career high of 30 points, it was a bit of a surprise to see him struggle today against the Mountaineers.

This will be a tough loss to swallow for the Terriers as it marks their first loss within the conference on the season dropping their record to 1-1 and 10-7 overall.

What to watch for going forward is how the Terriers will respond to this tough loss. They have a few days off until their next game when they travel to play another NEC opponent the Central Connecticut State Blue Devils on Thursday, January 16th at 7pm.