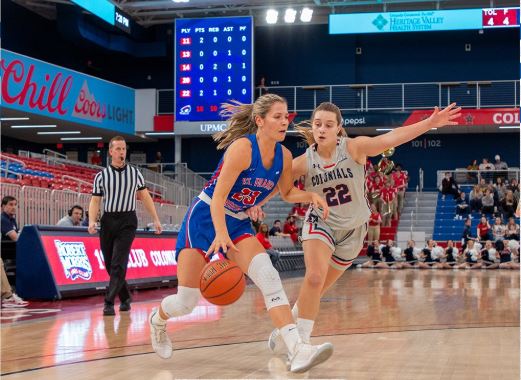 The contest started with the Terriers taking the lead on a 5-0 run.  At 2:37, the Colonials equalized at 8-8 and went on to take a two-point lead with a good layup by sophomore guard Esther Castedo. The Terriers would immediately tie the contest and end the first quarter with a good three from freshman guard Nevena Dimitrijevic, 13-10.

In the second quarter, the Colonials on a 6-0 run took the lead, 15-16 as they went on to outscore the Terriers, 23-28. The Colonials tallied 18 points limiting the Terriers to 10 points within the quarter.

The Terriers made an effort to cut the lead as they recorded two points within the quarter. The Colonials, also recording 20 points, took the quarter 44-69.

Top performers for the Colonials were Nneka Ezeigbo, Honoka Ikematsu, and Irekpitan Ozzy-Momodu.

Senior center Nneka Ezeigo led her team with a double-double. She recorded 16 points and 10 rebounds in 21 minutes of play.

For the Terriers, junior forward Ally Lassen led her team with 15 points in 29 minutes. She also grabbed three rebounds.

The Terriers will be back in action on Saturday, January 18, as they face Wagner at the Spiro Sports Center, Staten Island, NY. Game tips off at 1 p.m.