Terriers Defeated by Pacific on Thursday (4-6) 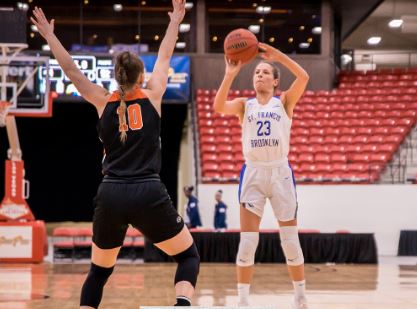 Thursday evening at the South Point Arena in Las Vegas, the St. Francis Brooklyn Women’s Basketball Team fell to Pacific 62-71 in their second of a three-game road trip.

Pacific immediately took control as they went on a 12-0 run at the beginning of the contest. With a good jump shot from Jade Johnson, the Terriers recorded their first two points of the contest. They then went on a 14-5 run to make an impressive comeback to end the first quarter, 14-17.

In the second quarter at 5:41, Ally Lassen with a good layup brought the Terriers one-point away from equalizing with Pacific however, Pacific kept the lead as they finished at halftime 32-35. Jade Johnson with a good three-point shot leveled the score immediately at the start of the third quarter. Pacific, on a 13-3 run, took a 10-point lead 38-48 (their largest of the contest). They went on to take the third quarter 44-52. In the fourth quarter, the Terriers tried to come back, but Pacific would maintain their lead as they went on to take the contest 62-71.

For the Terriers, senior guard Jade Johnson led with 23 points in 40 minutes. She also scored five of 10 three-point shots and recorded two steals.