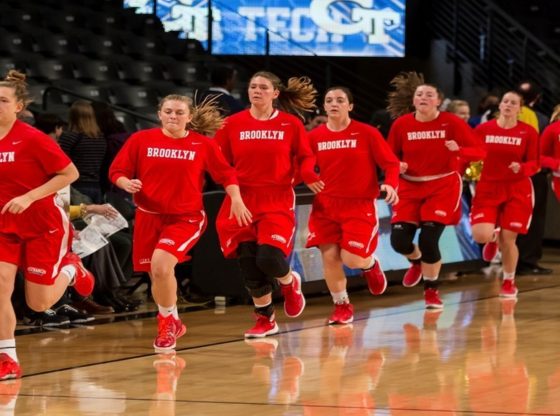 The St. Francis College Terriers women’s basketball team fell to the Monmouth University Hawks Tuesday 63-54 in the second game of the Hawk Holiday Classic, breaking the season tie between the two teams.

The game brought the Hawks to (3-7) and caused the Terriers to fall to (2-8), which is a shock because prior to the game, the Hawks were coming from a three-game losing streak and the Terriers had just won their first game in nearly a month.

Terriers senior guard Leah Fechko scored the first points of the game with a layup slightly more than a minute in.

The two teams were very close in scoring for most of the first half and were tied five times.

Towards the end of the first half the Terriers were leading 22-20, but Hawks junior guard Tyese Purvis made a three-pointer that put her team in the lead. The Hawks increased scoring and did a good job of blocking field goals for the rest of the half.

The Hawks came back from halftime even stronger, but it wasn’t anything the Terriers couldn’t handle.

Hawks senior guard/forward Sarah Olson was the first to score with a three-pointer 34 seconds in.

The Terriers edged their opponents for most of the third quarter, but things became more difficult for them at the beginning of the fourth as the scoring gap became wider. Frequent scoring by the Hawks made it impossible for the Terriers to catch up.

Hawks senior guard Jasmine Walker led her team in scoring with 15 points and two assists. Olson and Purvis both racked up 13 points.

The Terriers will stay at Monmouth University to face Norfolk State tomorrow in day two of the Hawk Holiday Classic.