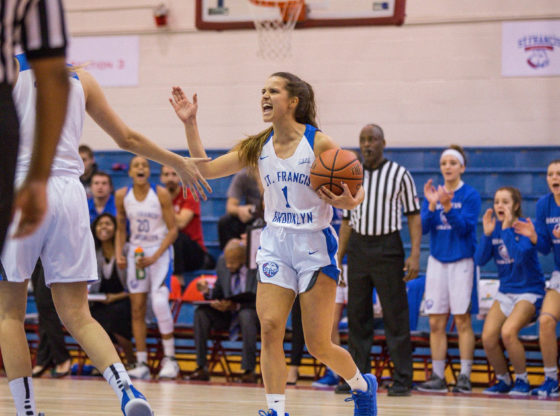 The St. Francis Women’s Basketball Team (7-6) defeated the Wagner Seahawks (2-10) in their first conference game of the season earlier today with a final score of 76-61.

Jade Johnson, Amy O’Neill, and Ebony Horton finished the game with combined total of 57 points out of the 76 points scored as a team and shot a total of 22-34 (64%) from the field. Jade Johnson led the team in scoring with 20 points.

Amy O’Neill played a major role in this game as she finished with 19 points, 6 rebounds and 8 assists. O’Neill also showed a huge defensive presence as she recorded 6 steals, with the first 5 steals being recorded in the first half of the game.

Khaleah Edwards on the Wagner Seahawks scored 11 points, shooting 57% from the field and 75% from behind the arc in the first half to keep the Seahawks within a 10 point margin but it couldn’t get done as the Terriers ended the half with a 5-0 run to push the lead up by 14 points, leading 44-30 at halftime.

The Wagner Seahawks went on an 11-4 run to start the second half to have them trail within a 5 point deficit. Once again, the Terriers went on another scoring run as they led by as much as 12 points at the end of the third quarter.

Wagner put up a good fight throughout the remainder of the game, keeping the game within a 10 point margin. They had the help of Redshirt Sophomore Taylah Simmons who scored all of her 12 points in the second half.

Getting to the free throw line in the fourth quarter was the Terriers biggest strength as the shot 5-7 (71.4%) from the charity stripe. This helped them to their largest lead of the night with 15 points in under 2 minutes left in the game.

With their first conference game wrapped up, the St. Francis Women’s basketball team advances to 1-0 in conference play. They will now play Bryant University this Monday at 7:00pm in Smithfield, Rhode Island.