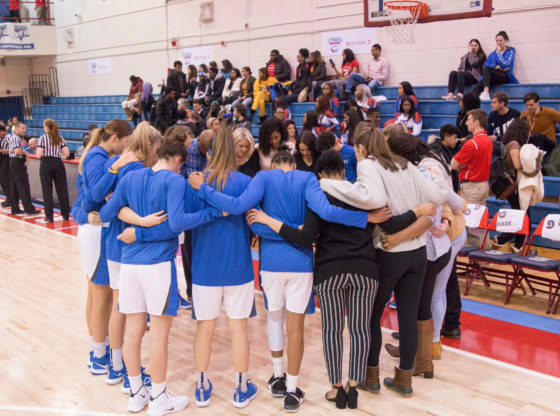 After a thrilling triple-overtime victory against the Loyola University (MD) Greyhounds on Friday, the St. Francis Woman’s basketball team continues their hot streak as they defeated the Saint Peter’s University Peacocks in a final score of 74-70 in yet another hard-fought battle.

The Terriers started off the game shooting 44% from the field in the first half, without having the lead over the Peacocks.

Their dominant performance in the second quarter had them trailing by 4 points at the half (39-35) as they settled with 14 points in the paint and out-rebounded the Peacocks by eight.

The Terriers did not give up at all in the second half as the game remained relatively close towards the final buzzer.

Graduate Student Dominique Ward played a huge factor in the last minute of the game as she gave the Terriers the lead with :44 seconds to go and also pulling down the final rebound of the game. Once Ward grabbed the rebound, she then passed it out to Freshman Ebony Horton who was later fouled, giving her two free throws to bring the lead up by four to seal the deal.

Johnson scored 12 out of her 23 points in the second half, shooting a total of 60% overall as well as 60% from the 3 point line. This is Johnson’s 5th game out of 9 in which she’s scored at least 20 points. This is also the eighth time in nine games in which the Terriers have scored at least 70 points in a game this season.

With this game all wrapped up, the Terriers are now 6-3 overall this season and will play their next game this Saturday, December 15that 1 pm against the University of Albany at home.