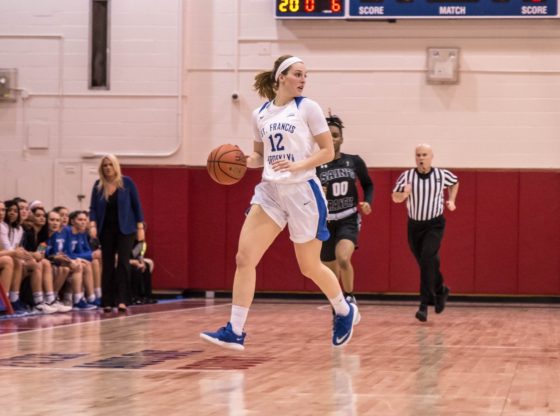 “I thought that the kids played well, they played hard, they gave us a lot of energy in the second half and I’m really really proud of them” – Head Coach Linda Cimino said to the Terrier Sports Network.

The first quarter of the game did not go so well for the Terriers as they shot a total of 37% from the field and going 25% from behind the arc.

They were able to shoot more comfortably in the remainder of the game as they went 10-16 (62%) from three and 19-35 (54%) after the first quarter. Even though they had shot better in the second quarter, they still found themselves down by four at the end of the first half.

The St. Francis Red Flash (PA) had the lead majority of the first half until the Terriers turned it around in the second half. It all started with Jade Johnson making a three pointer with 5:47 in the third quarter to take the lead. That was their first lead of the game since leading the Red Flash 14-12 towards the end of the first quarter.

Johnson then made 15 straight points in the third quarter to give the Terriers a 13 point lead at the end of the third.

Along with her 27 points scored, Jade grabbed a career high in rebounds (10).

Jessica Kovatch, the NEC’s leading scorer, wasn’t efficient tonight for the Red Flash as finished with 20 points in the game while shooting 42% from the field. Seven out of her 20 points scored came in the second half as she missed five out of her nine missed shots in that half.

This win for the Terriers will now have them tied in third place in the NEC standings with today’s opponent, Saint Francis (PA). St. Francis Brooklyn will now host Sacred Heart University this Saturday at 1pm in the Pope Physical Education Center.