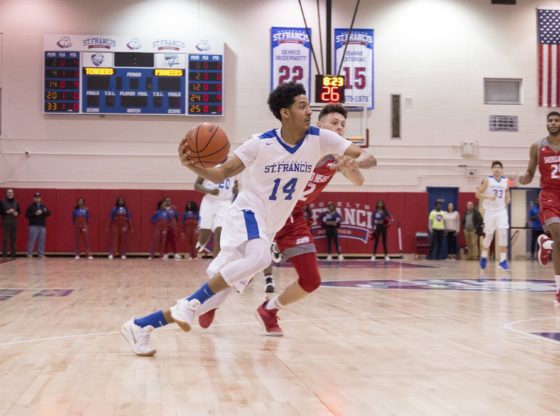 Sophomore guards Jalen Jordan and Chauncey Hawkins both scored over 20 points this game as Jalen led the game with a career high of 28 points as Chauncey went 23 point while playing 33 minutes off the bench.

Heading into halftime, the Terriers were able to lead Sacred Heart with the score of 41-30. SFC led the Pioneers as much as 14 points at one point in the first half. Hawkins’ scored 5 of his 23 points during a 9-0 run in the first half that lasted three minutes for the Terriers.

“I thought we really played well defensively in the first  half” said Coach Braica to the Terrier Sports Network. “They fought and they found a way, it was a great game, guys on both sides making great plays.”

Sacred Heart had an advantage in the second half as they out scored the Terriers, 24-10, in the first seven minutes of play. St. Francis and Sacred Heart went back-and-forth in buckets as they both were looking to get the lead. Hawkins made a huge three pointer to tie the game at 77 a piece with 3:15 left in the game.

With 1:40 to go, Jalen Jordan made a big-time jumper to tie the game for the seventh time at 81 points. Hawkins made two free-throws just 9 seconds later to give the Terriers an 83-81 lead over Sacred Heart. At the 44 second mark, the Pioneers of Sacred Heart missed a three pointer, in which the Terriers were able to make a three pointer of their own made by Glenn Sanabria.

The game was sealed for the Terriers as Jalen Jordan was able to make 6-6 free throws to give them a seven point lead.

The men’s basketball team of St. Francis have won their last two games and look to continue that streak as they play LIU Brooklyn tomorrow, January 21st, at LIU’s home court.