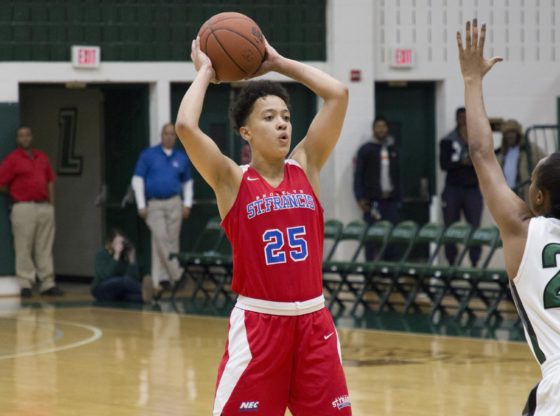 Senior guard Jade Johnson led the team with 16 points and 7 rebounds while playing a career high of 55 minutes.

Sophomore Ally Lassen finished with 15 points and 5 rebounds, shooting 55% from the field and 83% from the free throw line.

Senior Maria Palarino ended with 13 points, 11 rebounds, and 2 assists. Palarino earned her first double-double of the season. And

Senior Amy O’Niell ended with 12 points, 11 rebounds, and 9 assists. This was O’Niell’s second double-double of the season since averaging her first on November 16th (17 points and 11 assist).

Freshman Ebony Horton made the tying layup (53-53) with 0.9 seconds left to go in the fourth quarter to send the game into overtime.

Both St. Francis and Loyola scored a total of 9 points each within the first and second overtime, sending the game to their third and final overtime.

The Terriers then went on a 13-8 run to give them the lead at the end of the game. Sophomore Abby Anderson scored the first six points out of the 13 points scored in the final overtime.

With this win, the St. Francis Woman’s basketball team will improve their record to 5 wins and 3 losses overall. The Terriers will now play their next this Monday, December 10that 7pm at home against Saint Peter’s University.