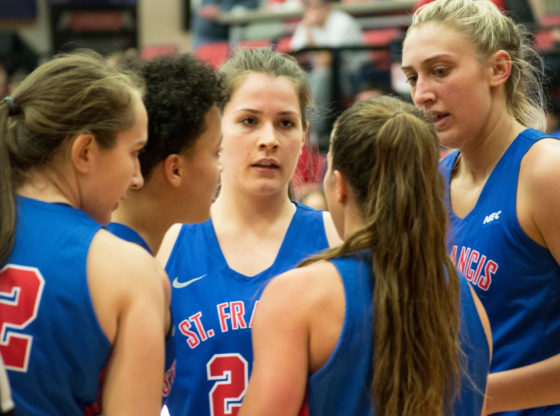 The St. Francis Women’s basketball team (8-6) played their second conference game today defeating the Bryant Bulldogs (3-10) in a final score of 60-55. With this win, the St. Francis Terriers are now 2-0 in conference play.

The Terriers started off the game with a terrific first quarter as they shot a total 60%, outscoring the Bulldogs. 19-13,  and maintaining their lead throughout the remainder of the quarter as they did not trail.

The game turned around in the 2nd quarter as the Bulldogs were able to outscore the Terriers 14-8. The Terriers also shot 4-14 (28.6%) from the field and went 0-3 from behind the arc in that quarter.

With the 14-8 run they had in the second quarter, Bryant was able to wash away St. Francis’ lead, tying the game at just 27 points apiece at the end of the first half.

Bryant started off strong in the second half as they went on a 6-0 run with the help of Junior Masey Zegarowski and Senior Haley Connors shooting a 3 pointer each.

The fourth and final quarter was a hectic and nail-biting due to the fact that it was mainly back and forth. The Terriers were able to hold on to the game as they went on a 8-5 run in the final 3:32 of the game to seal the deal.

Dominique Ward led the team with 16 points and 7 rebounds. Not only did she lead the team in points, but she contributed on the defensive end as well as she finished with a career high of 5 blocks.

As the St. Francis Terriers are off to a hot start in conference play, they look to continue their streak as they head back home to Brooklyn Heights to face Robert Morris. This game will take place on Saturday January 12that 1:00pm.