TERRIERS COME UP SHORT AGAINST LAFAYETTE 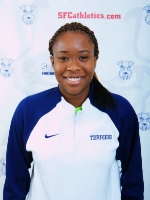 The teams were neck and neck for most of the first half but Lafayette’s field-goal percentage proved to be the difference as the Leopards pulled away slightly before half time.

The Leopards extended their lead in the second half as star center Danielle Fiacco used her 6’7” height to dominate as she recorded 11 points and had three rebounds in the game.

It was a successful return to St. Francis for Lafayette Head Coach Dianne Nolan who was inducted into the SFC Hall of Fame in 1991 for her success in basketball in the mid-70’s.

St. Francis had trouble scoring points in the paint all game due to the dynamic duo of Fiacco and 6’3” forward Emily Homan, who together scored 19 of Lafayette’s 46 points.

However, Terriers guard Stefanie Bingham had a team-high 10 points for St. Francis, and Sarah Benedetti scored seven points including a clutch three-pointer that kept the Terriers in the game for a while.

Lafayette won the tip-off to start the contest but it was Bingham who scored the first four points of the game.

The Leopards responded with 9-1 run before Bingham made another basket to cut Lafayette’s lead to 9-7.

Lead changes went back and forth before Lafayette took a 21-16 lead with just under three minutes to play in the first half.

Coming out of halftime the Terriers scored two quick points but had a tough time guarding Lafayette as the Leopards responded with a 7-0 run that put them up by 10 points with 15 minutes to play.

Benedetti hit a three-pointer to cut Lafayette’s lead to 34-25 and SFC point guard Jasmin Robinson added a basket of her own to cut the lead to just seven points.

However, the Leopards stormed back as they scored seven quick points of their own to increase their lead yet again.

It was a valiant effort by the Terriers, but once Lafayette established their double-digit lead, St. Francis could not reduce the deficit.