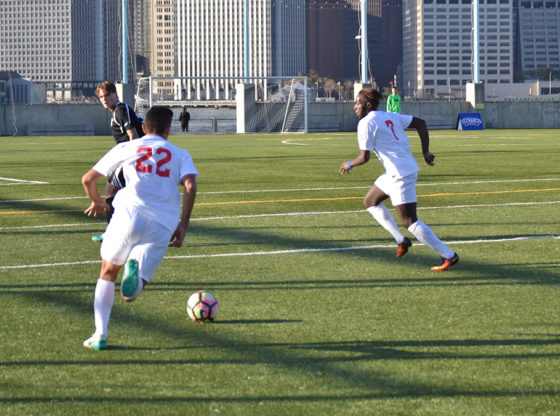 A goal by senior midfielder Salvatore Barone in the second half won the NEC Semifinal game for the St. Francis Brooklyn Terriers men’s soccer team Friday as they defeated the Sacred Heart Pioneers 1-0.

The Pioneers missed nine opportunities to score in the first half, while the Terriers only attempted to score once.

After returning from halftime, the Pioneers continued to take shot after shot, but couldn’t manage to score.

The Terriers started to take more shots as well. One came from junior defender Dominick Falanga and the other two were from sophomore midfielder Djiby Sarr.

It wasn’t until the game’s 76th minute that Barone scored the only goal of the game. With an assist from Falanga, the senior scored his fifth goal of the season.

Terriers junior goalkeeper Roberto Bazzichetto recorded three saves, while Robert Strain made one save for the visiting team.

The Terriers will host the Red Flash for the NEC Championship game tomorrow. The (12-5-2, 4-1-2 NEC) team visited Brooklyn Friday and defeated the LIU Brooklyn Blackbirds 1-0.

The Terriers also defeated the Blackbirds 1-0 in their last game of the regular season, which gave them home field advantage in the tournament.

The battle between the Terriers and Red Flash will begin at 1 pm.