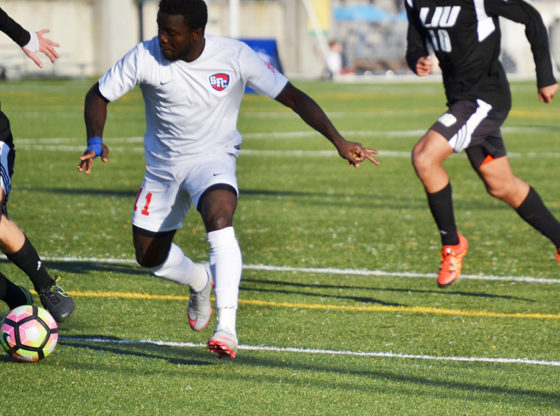 Senior forward Yussuf Olajide scored a goal in the first half Sunday, leading the St. Francis Brooklyn Terriers men’s soccer team to their 1-0 defeat over their rival LIU Brooklyn in the last game of the regular season.

Olajide’s goal came in the game’s 28th minute with an assist from junior defender Dominick Falanga. Olajide now has a team-high six goals and Falanga has a team-high five assists.

“We got a great goal on the counter, Yussuf finished it off, Dom made a great run down the line,” Head Coach Tom Giovatto said in a post-game interview. “We’re very happy with the result.”

The Terriers’ defense prevented the visiting team from scoring for 90 minutes.

“The guys stuck to the game plan,” Giovatto told SFC Today. “We were great defensively.”

LIU took many shots throughout the game, but could not manage to get the ball past Terriers goalkeeper Roberto Bazzichetto.

“You’re gonna give them opportunities,” Giovatto said. “You just want to make sure that you make it pretty tough for them. I think we did a good job of that.”

Giovatto is happy that him and the team will have the opportunity to host the Semifinals.

“It’s amazing, it’s a great feeling,” the coach said. “It’s great for the guys and great for us.”

The Terriers will host a higher seed in the NEC Quarterfinals on Friday, November 11.