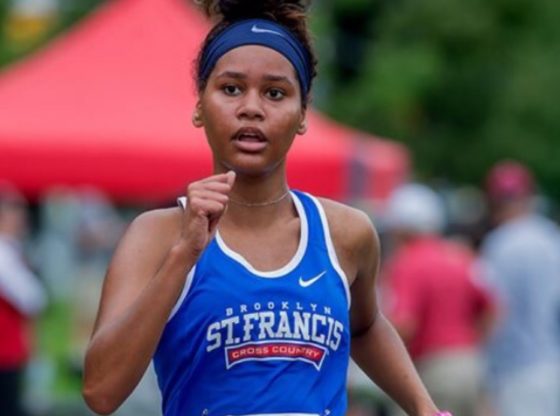 We’ve officially hit a month and a half into the track season for both the men & women at St. Francis College (SFC). I recently got the chance to see and hear from some of the freshman athletes on both the men’s and women’s team who are just starting to hit their stride both on and off the track.

One of the new Terriers , who I had time to shine the spotlight on this week was Perla Rodriguez. As a native of Brooklyn, the 17 year old shares on what her experience has been like since leaving high-school and racing for SFC at the collegiate level.

As the only fluent Spanish speaker on her team, Perla enjoys the uniqueness that comes along with being a Latina on such diverse team.

“I am the only Spanish speaker on my team, so I get to help some of the girls on the team with their Spanish homework; also I have never had a coach who spoke Spanish and now I do at SFC so I enjoy having conversations in our native language.”

As Rodriguez would later go on to tell me, she not just believes in herself but in the motto “all in one” helping her teammates in any way she can.

Aside from the new and fun experiences that college may bring also comes sacrifice, determination and even pressure for a student-athlete.

Perla spoke about this transition she’s now getting accustomed to as a freshman in college.

“The transition for me was big in some of my athleticism and not that big academic wise for now. When I was in high school I took Ap and college courses so I’m pretty good at time management.

“Now that I’m running at a D1 level though I feel like now it’s more intense than ever; We now have morning practices, afternoon practices and even lift weights.

“We also now have a variety of coaches as in high school I only had one, so as an athlete I feel like I can finally improve because I’ll have a coach that will only focus on the events I run when it comes to training plus there’s a lot of competition in D1 so I do get nervous every time I get to the starting line. ”

While the decision for many high school seniors on what college they will be attending may be nerve racking and overwhelming for Rodriguez it was pretty easy.

“It wasn’t a hard decision to come to St. Francis, because I liked the school. Besides the fact that it’s close to home, it is also the perfect size and its athletic program also drew my attention so overall the experience has been better than I imagined.

“I also feel very comfortable at St. Francis, everyone is friendly especially the professors. My teammates are also very friendly and very supportive, we all encourage each other during practices and races.”

Perla, while being relatively new to the school still has her own set of desired goals.

“A personal goal I desire to achieve this cross country season is to run a 21 minute 5K at our championship meet and overall maintain throughout my collegiate career a 3.0 GPA.

“I consider myself very competitive, so whenever I’m racing I like to always try to stay in first place in my heats. I work on ways I can maintain my speed on other competitors while learning what I can work on myself”.