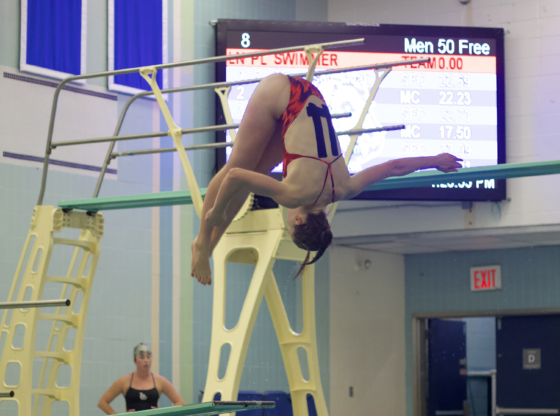 After the first two meets of the Swimming & Diving season, Freshmen Kayla McKenzie is currently having a remarkable start to her college career at St. Francis College (SFC).

She started off the season being named Diver of the Week in the first week of the season and has already broke the school record in the 1-meter dive.

McKenzie hails from Regina, Saskatchewan Canada until moving to New York just not too long ago.

“I was born and raised in Regina, Saskatchewan, Canada. I did not move and remained there my whole life until I moved to New York City” Said Kayla

Kayla began her diving career at a very young age but decided to give it a break after a couple of years. 3 years ago, was when she decided to go back to competitive diving and was a member of the Regina Diving Club.

“I dove for a few years when I was a child and quit. I returned just over three years ago and am beginning my fourth general diving season as a freshman here at St. Francis College.

“I realized diving was my passion after I quit the sport originally. I swam for a short period of time and found myself enjoying the starting dive into the water more than the swimming itself”

“When I was very young I participated in gymnastics. Diving and gymnastics share many common techniques and skills so it was easily transferable when gymnastics became too competitive for my parent’s likings.”

After realizing that diving was her passion, Kayla decided that she was ready to take her skills to the next step.

“Other schools and I were in the recruiting process exploring scholarship opportunities but St. Francis College was the school I went the farthest into the recruit process with”

Her interest in SFC began back in November of 2017 when she visited the school for a recruiting trip. The Diving head coach Christina DeBianchi welcomed her with open arms on the first day they’ve met.

“Her caring and funny personality allowed me to envision diving under her watch, and this played a large role in my decision to commit”

Her recruiting trip back in November gave her an early start to meet and connect with her current teammates as well. Her teammates showed extraordinary kindness and made sure that she was taken care of every single step of the way.

As she got closer to starting her first year of college, she was able to meet the other incoming freshmen that she competes with.

“I did however meet the rest of the incoming female, freshman swimmers recently and I have already developed close bonds with them” Kayla said “They are all hard-working, beautiful, and intelligent young ladies and I look forward to spending the next four years with them!”

Kayla entered SFC back in September with an athletic scholarship and a major in psychology. As a psychology major, she has big dreams planned out for her after she graduates from the school.

“I am currently a psychology major. I chose this because it is a good prerequisite for law school, as I want to be a lawyer after the completion of my post-secondary education”

Kayla has had many positive experiences throughout the first two months of college. From bonding with her teammates, learning from her coaching, and breaking records as well.

“Varying from team encouragement during a tough weight session to chatting between practices, countless moments have created a secondary family throughout the team for me personally”

She tallied those numbers in only her first meet at the collegiate level and nearly 3 years after getting back into the sport.

“These accomplishments meant a great deal to me” said Kayla “It was a huge relief given that I was quite nervous before the start of the competition.

“Many, including myself at times, questioned if I could succeed due to my deceased practice time over the years I had been away from diving. It proves to the school and myself that I have the capability to advance moving forward and do well throughout conference”

Kayla was very nervous entering the competition but was relieved after hearing the news that she had broken a school record. With the remainder of the season left to go, Kayla hopes to continue her success with the team and wants to make sure she makes St. Francis proud.