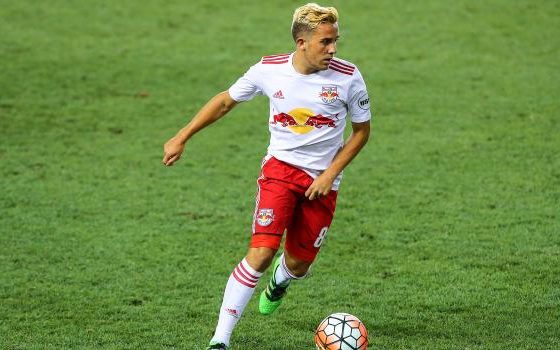 Vincent Bezecourt 8 19 16The 23-year-old – who graduated in May 2016 – started playing as a preseason trialist for the Red Bulls in January after contributing to the Terriers’ (10-3-5, 3-2-2 NEC) 2015 season with six goals and three assists as well as being named the National Soccer Coaches Association of America’s Third Team All-American.

By the end of the MLS preseason, the 5’7 French native was signing a United Soccer League (USL) contract with the Red Bulls’ second team.

When Bezecourt started the trial, he was clueless about the training intensity, pace and rhythm on the field. He had trouble figuring out what the coaches were expecting from him and it was also a big challenge because they could have told him to go home at any time.

“It’s a new environment so you’re kind of scared to do a bad mistake, and you feel like you’re being watched at any time,” Bezecourt told SFC Today.

Despite the challenge, Bezecourt scored a goal in the first team’s 5-0 defeat over the Montreal Impact and served as a substitute for the second team’s preseason friendly against Bethlehem Steel FC.

After signing a contract to play for the Red Bulls II, he felt that he had gained the trust of the coaches and players, but still had to prove himself on a daily basis.

“You feel more comfortable because you know the way the players around you play and you also don’t play with the idea of being cut at any moment,” Bezecourt said.

For most of his time as a trialist, Bezecourt had no idea he would be chosen to join the team. A few novice players were participating in the trial during MLS preseason and the Red Bulls roster was already nearly full. While playing in the second period of preseason in Orlando, the coaches told Bezecourt that they were pleased with his performance and that he would at least get a USL contract with the Red Bulls II.

Bezecourt hopes to eventually play for the first team in the MLS, but considers himself to be in a good place right now.

Bezecourt“USL pro is a good level to develop myself as a player,” Bezecourt told SFC Today. “I know that I have the capacity to play my football and show what I have.”

Bezecourt’s next big challenge will be proving to the first team players and coaches that he is good enough to play in the MLS.

In his first season with the Red Bulls II, he scored six goals and made two assists.

Prior to scoring these goals, Bezecourt suffered a knee injury during his second match of the season, which put him on the bench for four months. However, he started performing well once the coaches were ready to put him back on the field.

“I started scoring and assisting my teammates so now I’m starting most of the games and getting decent minutes on the pitch,” Bezecourt said.

Bezecourt feels that he is a major contributor to the team, but continues to work harder so that he can improve even more.

“I keep working hard like I was still on the bench trying to win a starting spot,” Bezecourt said.

Bezecourt received a Bachelor’s degree in International Business from SFC. Before making it to the USL, he was planning on applying to graduate school. This new opportunity has changed his mind about enrolling in a Mater’s program, but he will consider it if his soccer career doesn’t work out.

“To be honest, I wasn’t expecting to be where I am right now, but now that I kind of experienced the pro life, I wanna do whatever it takes to be successful in soccer and get to the next level,” Bezecourt told SFC Today.