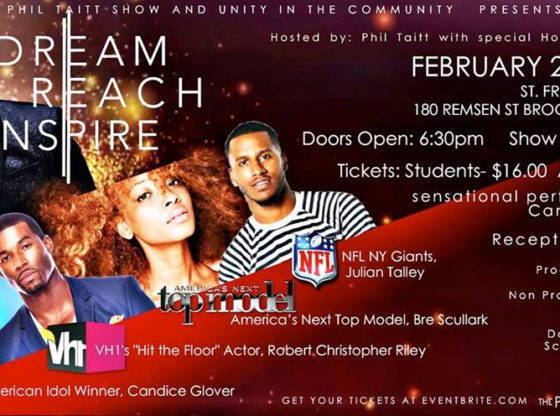 Senior Phil Taitt – host of the YouTube web cast The Phil Taitt Show – will hold a fundraising event with the non-profit Unity in the Community aimed at inspiring the students of St. Francis College on Friday, February 26.

Dream, Reach, Inspire will welcome four honoree panelists who will share the stories of how they accomplished their dreams. Proceeds from the event will go to Unity in the Community’s Do Right Do Good Scholarship Award.

The rising web show host decided to hold the event because college students often go to album release parties, but leave not knowing how they can become like the artist on stage.

“Most of the time people leave thinking, how can I get to that level or why isn’t that me? Well, at this event we will hear from people who made their dreams their realities,” Taitt told SFC Today.

Taitt’s show has the same concept – welcoming successful guests who tell their story and inspire the audience. Taitt is happy to use the show’s platform to not only inspire his fellow students, but donate money to a good cause.

“So many times we work towards our dreams, but we can’t forget the generation behind and making sure that they can dream just a little bit bigger,” Taitt said.

One of the panelists will be Candice Glover, an R&B singer who won season 12 of American Idol after auditioning to be cast three times. The 26-year-old released her debut album Music Speaks in 2013 along with her single “I Am Beautiful” which made the Billboard Hot 100.

Another panelist will be Robert Christopher Riley, a Brooklyn-born film, TV and theatre actor who has appeared on VH1’s “Hit the Floor” and in the 2012 Hollywood film The Bourne Legacy.

Bre Skullark – Harlem-born fashion model and actress who placed third on America’s Next Top Model Cycle 5 – will also speak to the students.

Also speaking will be Julian Talley, a wide receiver for the New York Giants.

“You’ll be surprised to hear about where they came from and their path to success,” Taitt told SFC Today.

A reception will follow with live entertainment including a performance by Glover.

Tickets are on sale now at Eventbrite.com. Admission is $16 for students and $22 for adults.