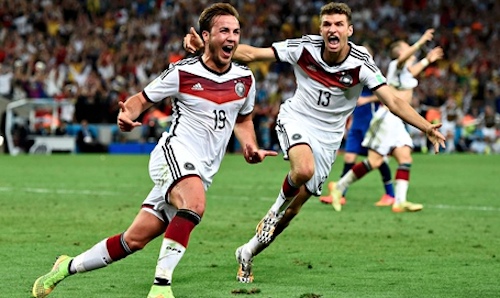 Germany’s midfielder Mario Goetze (#19) scored his team’s first and only goal during the World Cup final soccer match in 1-0 win over Argentina in extra time.

With just two touches, Germany’s 22-year-old substitute scored in the 113th minute. First he trapped Schurrle’s cross with his chest and then volleyed the winning goal into the net.

Goetze’s goal gave his country its fourth title, but their first as Germany since they won three previous titles as West Germany.

Today’s match without a doubt was full of attack and drama from head on.

But, within the first 31 minutes of the game, the surprising starter seemed to have suffered a head injury after colliding with Argentina’s Ezequiel Garay’s shoulder and therefore his position needed to be replaced once again.

With missed goal chances from both teams in the first and second half and intensity increasing every minute during extra time, Argentine star Lionel Messi’s efforts did not go without notice.

After Germany’s slaughter against Brazil in the semifinals, Germany scored a total of 17 goals within six matches; five more than any other team. They have clearly showed their dominance throughout this tournament.

Many feel Germany’s win was long over due since they last won in 1990.

Germany’s 2014 FIFA World Cup win made them the first European team to win a World Cup played in South America.