SUNNY SIDE UP FOR SFC STUDENT’S BAND

Home /Entertainment/SUNNY SIDE UP FOR SFC STUDENT’S BAND 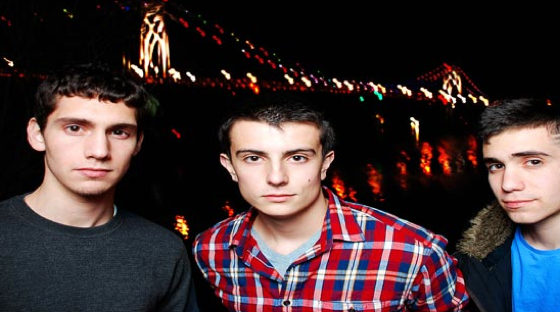 At first glance, Steven Olsen may look like your typical SFC student — but he is also lead vocalist and guitarist in the alternative pop band City Side Up.

City Side Up was originally thought up as a name for a potential record label that Olsen (middle) wanted to pursue after high school.

After scrapping the idea of a record label, Olsen decided to form a band with the same name with two friends from high school, Andrew Messina and Drew Orlandi.

Olsen’s influences include Elvis Presley, Queen, SRV, John Mayer and Blink-182, and like those artists Olsen wants to send a out message through his music.

City Side Up’s lyrics focus on singling out what makes you happy and the struggle to enjoy making music without become obsessed with success.

“Musicians have a personal relationship with their listeners,” said Olsen.

One song that changed his life was Blink 182’s What’s My Age Again, which led him to learn to play the guitar.

“Musicians speaks to their audiences personally straight from the CD through the headphones and into your head,” said Olsen.

Following their motto of finding happiness, as a ‘do it yourself’ kind of band, they manage their websites, affiliates, and merchandising all while writing their own lyrics.

Steven adds to the creative process by designing their own album covers on Adobe Photoshop.

Although his studies are a priority — Steven’s an Information Technology major and Economics minor — Olsen sees playing with his band, “as more of a need.”

With their addictive alternative-pop beats hitting the scene — you can find their music on iTunes — it won’t be long before their name gets out there to the masses.

On February 28, 2010, City Side Up will be ‘battling’ with another band from St. Francis College, the alternative metal group KVC at Sullivan Hall in Manhattan.

If you want to learn more about City Side Up, visit their site at:

They currently have one EP and single out on iTunes which are available to purchase or to grab for free!

REVIEW: UTADA ALBUM THE ONE TO CRACK US MARKET?
IN CONFESSION, MIND YOUR OWN BUSINESS