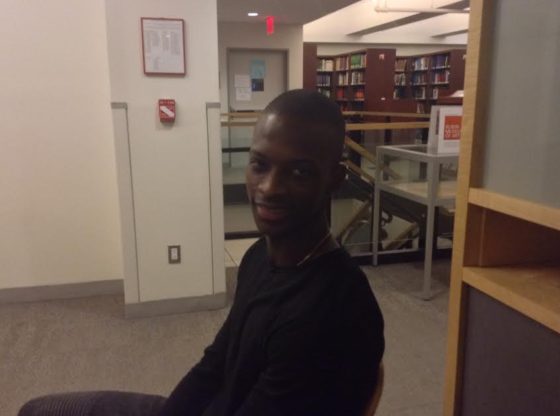 Junior Health Promotions major Oumaru Fofana wrote a letter last semester addressed “to whom it may concern” — explaining his troubling situation that forced him to leave school. Freshman Jacklyn Reiszel found the letter in a used text book and gave it to SFC Today so he could be contacted for an interview.

Fofana – who has since returned to St. Francis College — left the foster care system two years before writing the letter and was homeless at the time. The situation took such a toll on him that he found it difficult to attend classes and do assignments, he wrote in the letter.

The letter also details his being supported by church peers, working part-time to make ends meet and a promise to be more involved in his studies.

“I think I was on my way to school,” Fofana said in an interview with SFC Today. “I was here in the library or on the train typing it on my phone, and then, once I got here, I rewrote it.”

Fofana decided to write the letter because he didn’t know who to go to for help and needed someone to find out about his struggle – even if it was another student who never met him. He also said that putting his emotions on paper helped him cope with the situation.

“I was under so much pressure. I didn’t know what I was doing,” Fofana said…”Just because I’ve been doing a lot of things on my own.”

He wrote the letter to explain how sincere he was about school, despite his inability to continue attending.

“I obviously want to be educated,” Fofana told SFC Today. “It was somewhat of a way for me to reach out for some type of help, guidance, anybody: a professor, teacher, anyone in this student body.”

The reason he is homeless is because he doesn’t have family in New York and doesn’t make enough money to pay rent.

“My dad is in Boston and my mom, brother, and sisters are all back in Africa,” he said. “So, technically, it’s all solo-dolo.”

Fofana thinks the letter was effective because students will now know what he went through, including ones who may be going through a similar struggle.

“It’s an eye-opener because there’s a lot of college students all across the country that’s like struggling,” Fofana told SFC Today. “They don’t have places to go, they don’t have vocations after school and you never know. You don’t know about it because they’re just sitting there answering their phone, homework, whatever that’s necessary.”

Fofana wishes that he could spread awareness about problems like his or help other struggling students.

“I wish there was a way I could bring an awareness about it…and I wish I had the funds and the money to supply housing for students who have,” Fofana said. “Because you never know peoples’ situations and stories, and that’s one thing I enjoy about being on campus because you get to learn about anyone and their stories.”