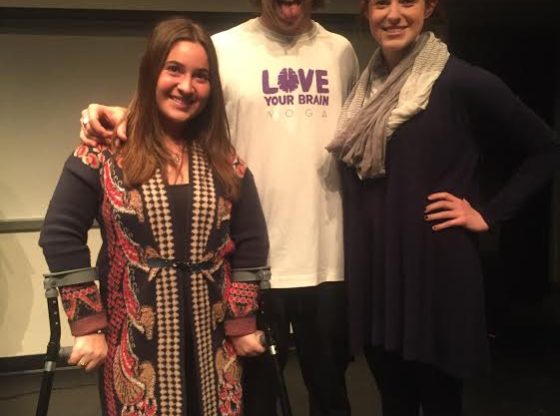 Pearce was an Olympic hopeful slated to make the 2010 US Olympic Snowboarding team and was at the top of his game as one of the world’s best snowboarders, even beating out the sport’s most well-known figure, Shaun White, on several occasions.

His world came suddenly crashing down when he suffered a TBI during a routine training exercise in December of 2009, just one month before the Olympic trials.

With his career devastated and his Olympic dreams dashed, Pearce had to rebuild his brain and body almost completely. The subsequent months consisted of painful and tedious rehab, intensive care, and the constant reminder that he would no longer be able to compete the way he once had.

“[To make it to Vancouver] was my dream,” Pearce said.

But instead of competing for his country as one of the greatest snowboarders in the world, he found himself laying in a hospital bed, wondering if he would ever function independently again.

Pearce had suffered a concussion a week and a half prior to his career-ending TBI.

“When your brain is broken it doesn’t have the ability to tell you that it’s broken,” he said.

So Pearce returned to the only world he has ever known — the world of extreme snowboarding — and incurred his life-changing injury shortly thereafter. His main focus now is to educate other people about brain injuries and ensure that no one else goes through the suffering that he did.

As of today, Pearce has regained most of his brain function, but recovery is an ongoing process that Pearce concedes that he will have to work on for the rest of his life.

His journey toward recovery has catapulted him in an entirely new direction. He started a foundation called “LoveYourBrain” which works to advocate for people with brain injuries, and he has become the face of the movement for survivors of TBIs. The organization works to create a sense of community for those affected by TBIs and provide a support system for people who might otherwise feel isolated in the wake of a severe brain injury.

Pearce finds this sense of community so important because it was his friends and family who got through him through his life-altering injury and helped him reconstruct his sense of self.

The LoveYourBrain foundation uses meditation and yoga to help survivors; both of these techniques helped Pearce during his recovery by exercising both mind and body.

“How nice is it to just stop for a moment and breathe?” Pearce asked. “To just be with yourself and be quiet. And do nothing.”

He emphasized the importance of stopping what he calls “ANTS,” or “Automatic Negative Thoughts” that pervade the brains of many TBI survivors as they come to terms with how their lives have changed post-injury.

Pearce is also the subject of the critically-acclaimed 2013 documentary “The Crash Reel” which chronicles his rivalries and friendships with many of his competitors, and Pearce’s journey as he rose from the ashes of his life-threatening injury.

“You gotta love it,” Pearce said. “You gotta realize things have changed now. I’ve accepted how much my life has changed.”

Brain Injury Awareness month is March, and Pearce continues his unending crusade as a vocal advocate of the struggles, survivors, and supporters of the TBI community.