STRONG COMEBACK NOT ENOUGH FOR TERRIERS 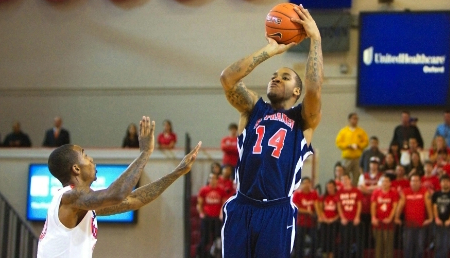 A strong second-half comeback by St Francis College men’s basketball team was not quite enough on Monday night as the Terriers finally fell to UAlbany Great Danes 76-64 in front of a packed and noisy home Brooklyn crowd.

St Francis junior forward Travis Nichols had another impressive game, with 23 points overall that included 7-for-11 from the three-point distance.

Nichols landed six out of his eight attempts from behind the arc in the second half, while sophomore guard Ben Mockford (13 points) and senior forward Stefan Perunicic (11 points) also impressed.

However, UAlbany rallied to win the game in the closing stages after a crucial time out gave their coaches a chance to lift the team.

UAlbany’s junior guard Gerardo Suero scored 25 points, including a crucial three-pointer with 2:06 remaining to lift the visitors to a 76-64 win.

St Francis men are now 3-7 for the season and move on to host Norfolk State University on Friday (Dec 23) at 2pm.

St Francis women’s basketball team is at home to Lafayette College on Wednesday (Dec 21) at 5pm.

* Your student newspaper sfctoday.com will be covering both games with a live feed and tweets, so watch out for the reports.