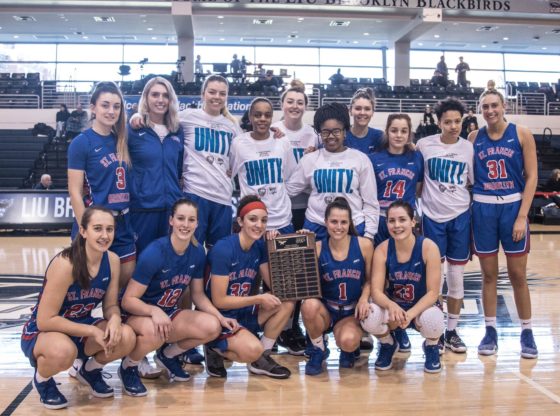 On a day remembering Martin Luther King Jr. and playing their first “Battle of Brooklyn” game this season, the St. Francis Women’s basketball team (10-8, 4-2 NEC) was able to defeat their rivals LIU Brooklyn (1-16, 0-6 NEC) in a final score of 79-67.

The game opened up with the LIU Blackbirds taking control over the Terriers in the first quarter as the finished the quarter leading by eight points (23-15). The quarter could’ve ended up with a six point deficit as Sophomore Ally Lassen on the Terriers attempted to beat the buzzer with a layup, but it ended up not counting.

In the second quarter, the Terriers took control of the Blackbirds as they tied the game at 25 points  each as Jade Johnson drained a three-pointer at the 6:47 mark. Redshirt Junior Mia Ehling knocked down another three-pointer at the buzzer to give the Terriers a 39-36 lead at the half. It was their first lead of the game since leading 6-4 in the first half of the first quarter.

Freshman Tiya Misir and Sophomore Jeydah Johnson of LIU made back-to-back shots to open up the second half which gave the Blackbirds a 40-39 lead over the Terriers. Everything started to go downhill for LIU as St. Francis went on a 20-10 run to close the third quarter, leading LIU with a score of 60-50.

The Terriers kept the lead going in the fourth quarter as they finished the game and won by 12 points over their rivals. More of their shots kept on going in as they finished up the second half shooting 62% from the field and 80% from the three point line.

Junior Jade Johnson on the Terriers finished the game with a career high in points, 33, and grabbed 4 rebounds along with 3 assists. Johnson was lights out in this game as she knocked down a total of 8 three pointers out of 10 attempted (80%). She also shot 5-6 (83%) from the free throw line. She was also named the “Battle of Brooklyn” MVP for the second year in a row.

Sophomore Ally Lassen scored 16 points in the game as she shot 5 for 9 (55%) from the field and 66% from the free throw line. Lassen also grabbed 5 rebounds in the game.

The Terriers will now continue their four game road trip as they head into New Jersey as they take on the Knights of Fairleigh Dickinson University this Saturday, January 26th, at 2:00 pm.