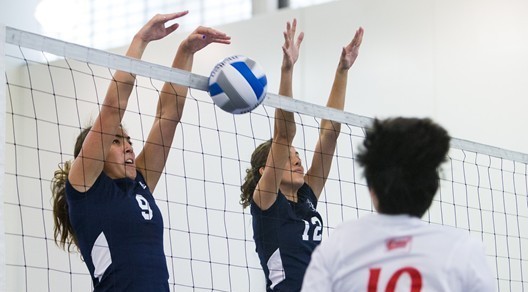 After dropping their first match of the day to Hofstra University, the St. Francis Terriers women’s volleyball team had quite the rebound later on in the evening by sweeping the New Jersey Institute of Technology in three consecutive sets.

The Terriers headed into this contest with a record of (1-5) and in much need of a victory, especially a convincing one such as this.

In the games first set we witnessed a highly entertaining back and forth contest in which both teams looked very strong throughout. Sophomore setter Alexa Carporuscio set the tone using her playmaking ability to distribute the ball effectively, which put her teammates in good position to strike.

Throughout the first set the Terriers would respond to every challenge and ultimately hold on for a 27-25 advantage after sophomore outside hitter Brooke Haliscak stepped up for the set-winning kill.

In the second set the Terriers battled even more adversity due to having a slow start on the scoreboard, falling behind 10-4 early. However, the Terriers got scorching hot late, and when it mattered most they answered the bell with seven straight kills to come from behind and take the second set with a score of 25-21.

The games third and final set did not disappoint either for the Terriers as they carried their momentum over to mount a 14-5 lead on N.J.I.T. Junior outside hitter Saleesha Matthews provided some much-needed fuel off the bench by putting together three kills in crunch time as the Terriers held off N.J.I.T. 25-19, completing the sweep.

Sophomore outside hitter Domenique Gerard was everywhere on the floor today, and her teammates seemed to thrive off of her energy throughout the entirety of this game as she put forth her second great performance today.

Other very noteworthy performances included senior Ali Long, who had a career high 21 digs in today’s victory, and sophomore Niehly Sosa made a key contribution with 9 kills.

This was a great win by the Terriers women’s volleyball team today, and they will surely be looking to carry this momentum over to their next match-up, which is at home tomorrow (4 p.m.) against Manhattan College, (4-1).